Main Layers in an Operating System 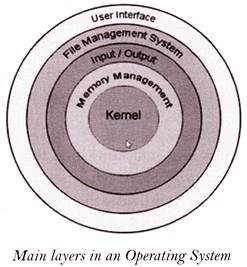 Classification of Operating System is as follows:

v  Multiprocessing: Supports in running a program on multiple CPUs within a single computer system.

v  Multitasking: Allows you to run more than one program at the same time.

v  Multithreading: Permits all different modules of a single program to run at the same time.

Microsoft windows is a type of Operating System available in 32 and 64 bit versions. It was developed by Microsoft. It provides a Graphical User Interface (GUI), virtual memory management capabilities, multitasking functionalities and support for many peripheral devices.

Earlier in Microsoft Windows Operating System, there was no graphical interface to operate a computer and utilize its resources. User had to know the overall commands with their correct and complete syntax.

Regardless of IBM's interest, Microsoft continued with development of the GUI. After completion of its development, the new Operating System, Windows is named by Microsoft and thus in 1985 the first version was released in market.

The following are different versions of Microsoft window: 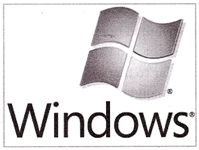 Windows 10 is the latest version from Microsoft. Windows 10 is a personal computer Operating System developed and released by microsoft in July 2015 as a part of the windows NT. This Operating System includes improved support for biometrics authentication through the Windows Hello. The full screen start menu is used in this mode, similar to Windows 8, but scrolls vertically instead of horizontally. The major change in windows 10 is the introduction or new default web browser, 'Microsoft Edge', which is designed to replace Internet Explorer (IE) and Cortana - the personal assistant.

UNIX is one of the time sharing Operating Systems primarily intended for program development and document preparation environment. It is a set of programs that act as a link between the user and the computer. The first version of UNIX was written by Ken Thompson, later joined by Dennis Ritchie. It was a single user system written for the PDP-7 in assembly language. Several specialized versions of UNIX, such as the programmer s Workbench, UNIX/ PWB and Writer's Workbench, UNIX/WWB are also available.

Some of the major features of UNIX are as follows:

The LINUX Operating System was created by a student named LINUX Torvalds.

The features of LINUX Operating System are as follows:

v  Anyone can modify the source code of LINUX and redistribute it. Hence, it is an open source Operating System.

v  LINUX operated computer does not hang, therefore, anyone can run LINUX for days and months without the need to restart the computer. This is the reason for using the LINUX Operating System in most of the internet servers.

v  The LINUX operated computer allows the user to use four desktop screen simultaneously. A user can switch anytime from one desktop screen to another.

v  LINUX offers a standard file structure in which system files or user files are arranged.

v  LINUX kernel and application programs allows their installation on any type of hardware platform.