Relations of Paternal Side

Relations of Maternal Side

Questions on Blood Relationship are related to our day to day life. We are bound by our kith and kin through a chain of relationships. The examiner defines the simple relationships by using rather complicated set of definitions and expects from us to comprehend these definitions rather quickly, in order to solve these problems, analyse the given statements carefully and systematically.

Pay particular attention to the information given in the question itself without your personal biases and preconceived notions and assumptions coming to the fore.

Questions on Blood Relationship can be solved by any of the following methods:

Is it possible to define relationship between two persons without knowing their sex?

No, it is not possible. Consider the following illustration:

(i) First of all choose the two persons; between-whom relationship is to be established.

(ii) Next, pin-point the Intermediate relationship i.e., such relationship through which long drawn relationship can be established between the required persons.

(iii) Finally, conclude the relationship directly between the two persons as per the requirement of the question.

(iv) From a particular name we cannot ascertain the sex (gender) of that person. The name does not always show the gender beyond reasonable doubt.

The list given below is quite helpful in recognising some indirect relationships:

The questions on Blood Relationship are asked in various formats but substantially there is no difference between them. However, consider the pattern of the question we are obliged to discuss them separately.

The mother of Sukesh is the only daughter of Sarita’s father. How Sarita is related to Sukesh?

Explanation: Only daughter of Santa’s father = Sarita only. The mother of Sukesh is Santa. 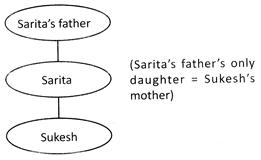 B is son of C’s maternal grandfather’s only daughter. How is C’s father related to B?

Explanation: Cs maternal grandfather’s only daughter means Cs mother So, B is son of Cs mother. So, B and C are siblings. Cs father is B’s father too.

Introducing a man, Neeraj said, “His wife is the only daughter of my wife.” How is Neeraj related to that man?

Pointing towards a girl, a teacher said, “She is the only daughter of the only son of the wife of the father-in-law of my wife”. How is the girl related to the teacher?

Wife of the father-in-law of my wife = wife of teachers father = teacher’s mother.

Only son of teacher’s mother = teacher

So, she is only daughter of teacher.

Pointing towards Bhavan, Nalini said, “He is the son of only son of my father”. How is the mother of Bhavan related to Nalini? 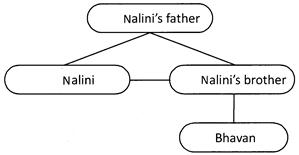 Explanation: Boy’s maternal uncle is woman’s brother Therefore, the boy is the son of the woman.