Look at the following chemical reaction of Hydrogen and Oxygen 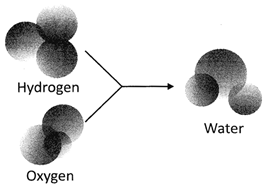 Types of reaction depend on nature of the combination of reactants and energy released or absorbed by the resulting chemical, after the reaction. There are three types of reaction, which have been discussed below:

In the synthesis reaction, two molecules combine chemically to form a more complex molecule and energy of the resulting molecule is stored in its bonds. Proteins are built from amino acid and whole energy is stored in it.

In this reaction, the bigger molecule is broken into smaller molecule and energy is released.

The electrolysis of water into hydrogen and oxygen is the decomposition or analysis reaction.

In this reaction, reactants exchange and replace their parts to form new compounds. When sodium chloride and silver nitrate are mixed together, sodium nitrate and silver chloride are formed.

The combination of zinc and hydrochloric acid forms zinc chloride and it replaces the hydrogen..

Acid and Base Reaction

The reaction between hydrochloric acid and sodium hydroxide produces sodium chloride and water. It is an example of acid base reaction. The chemical equation is as follows,

The word reactant is derived from which one of the following process, in which a new substance is formed?

Which one of the following types of reaction is involved for the formation of iron sulfide from iron and Sulphur?

(b) Acid base reaction