The maximum and minimum atmospheric temperature can be measured with the help of thermometer.

Humidity is the amount of water vapour present in the air. The capacity of the air to hold water vapour increases with temperature.

The relative humidity is measured with an instrument called hygrometer.

The humidity in air determines the chances of rainfall. Air when becomes saturated and Temperature of atmosphere falls, the water vapour in the air condenses. When condensation takes place high above the ground, clouds are formed. When the droplets join together and become heavy, they come down as rainfall. If raindrops pass through a very cold layer of air, they freeze and come down as hailstone. The rainfall is measured is millimetres with an instrument called rain guage.

Snow is formed when the temperature in the atmosphere is very low and the droplets in a cloud freeze into crystals of ice.

In winter after sunset, the water vapour near ground condenses due to low temperature. The condensed droplets in air are called fog.

The average weather pattern of a place for the long time is the climate of that place. The climate of a place is determined by its latitude. The five main latitude regions of earth's surface comprise geographical zones divided by major circles of latitude. The area around the equator, which is heated by the direct rays of sun, is hot or torrid zone The area around the North Pole and the South Pole, which is cold because the rays of the sun slant the most, is called frigid zones. The region between the torrid and frigid zone is temperate zone.

Rainfall is another important factor that determines the climate of a region. The degree of rainfall depends on factors such as winds, closeness to the sea and the presence of the mountains. 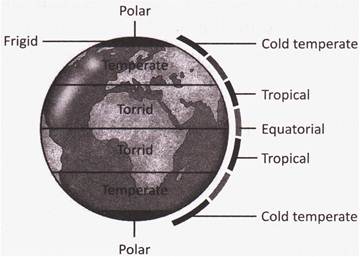 Adaptation of Animals to Climate

Animals have to adapt to the environment in which they live to cope up with the conditions like temperature, light, moisture and availability of food.

Animals living in the Polar Regions such as polar bears, ermines and penguins have thick coat of fur to conserve heat. The polar animals such as polar bears and seals have very thick layer of fat under their skin. This fat layer protects these animals from cold and acts as a store of food in winter.

To cope up with the cold and shortage of food, many animals such as lizards, snakes, frogs and squirrels hibernate.

Camels can survive in the harsh climate of deserts. Camels excrete concentrated urine' to reduce the loss of water from their body. They drink large quantities of water at a time. Their bodies are adapted to tolerate the extreme temperatures to cope up with hot days and cold nights of the deserts.

The area of earth near both sides of the equator is called tropical region. The tropical regions have hot and humid climate. Major animals living in tropical rainforests are elephants, monkeys, Gorillas, Birds, Snakes and lizards, etc. They adapt themselves in Tropical conditions through various adaptations.

Notes - Weather, Climate and Adaptations of Animals to Climate