(ii) In singular sense, statistics is the science which deals with the collection, presentation, analysis and interpretation of some numerical data.

Someone who carries out the job of collection of data is called an investigator.

(i) Inclusive method or discrete form.

(i) Bar graph: A bar graph (diagram) is a pictorial representation of the numerical data by a series of bars or rectangles of uniform width standing on the same horizontal (or vertical) base line with equal spacing between the bars. Each rectangle or bar represents only one value of the data.

(ii) Histogram: histogram is a graphical representation of grouped frequency distribution for continuous classes in the form of rectangles with class intervals as bases and corresponding frequencies as heights. 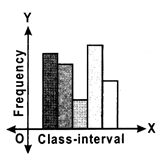 Note: In a histogram, rectangles are drawn leaving no gap in, between consecutive rectangles.

Frequency polygon: If the points pertaining to the midvalues of the classes of a frequency distribution, and the corresponding frequencies are plotted on a graph sheet and these points are joined by straight lines, then the figure formed is called a frequency polygon, Frequency polygons are useful for large and continuous data.

(i) Arithmetic Mean (A.M.) or Mean: Arithmetic mean or simply mean is the most common and widely used measure of central tendency. It is found by adding all the values of the observations and dividing it by the total number of observations. It is denoted by \[\overline{x}\](Read as x bar.).

(ii) Median: If the observations are arranged in increasing or decreasing order, then median is defined as the middle-most observation.

(iii) Mode: An observation with the highest frequency is called the mode.