Diseases and their Defence Mechanism 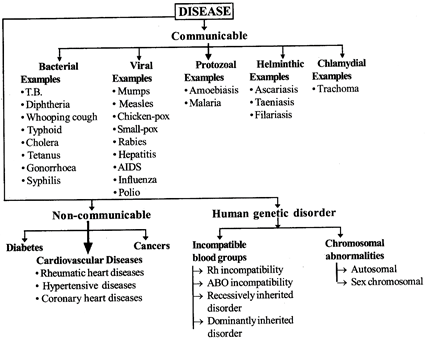 Malaria: It is caused by Plasmodium species & spread through female Anopheles mosquito. Primary host are female mosquito of genus Anopheles and humans acts as intermediate host.

-   biopsy and histopathological studies of the tissue.

-   blood and bone marrow tests for increased cell counts as in Leukaemia,

-   use of techniques like radiography, magnetic resonance imaging (MRI) and computed tomography (CT) for cancer of internal organs.

AIDS is caused by Human Immunodeficiency Virus (HTV) which is retrovirus.

-   ensuring use of disposable needles and syringes.

The term immunity refers to the specific resistance exhibited by the host towards infections by micro-organisms (pathogens) and their products.

(i) Phagocytosis of invaders by leucocytes and macrophages (called cellular barrier).

(iii) Destruction of micro-organisms swallowed with food by the HCl of gastric juice & by digestive enzymes and tear from eye (coiled physiological barriers).

(a) Ig A - Protects from inhaled or ingested pathogens.

(b) Ig D - Present on lymphocyte surface as receptors, activation of B cells.

Major groups of psychotrophic drugs, their examples and effects