·                     In ordinary usage, what we use to pay for things is referred to as money. But the definition of money is still an unresolved fescue of monetary economics. Though money is a concept which still lacks absolute clarity in scientific terms.

·                     In empiricists approach. Money is a complex phenomenon. It does not define itself to currencies and demand deposits of banks, but also includes a host of financial asset such as bonds, government securities, time deposit with banks and equity shares, which serve as a store of value.

1. It plays a very active and high important part in the economic system by influencing the general level of process. Its volume and function of money whether the motivation comes from the state itself or from the general public, can lead to a rise or fall in the general price level.

3. Money makes it possible to have financial economic planning as workable proposition of physical planning at the micro-level and macro level.

Near Money: A modern community holds various kinds of financial asset to store value. Money however is the most liquid of all assets. They are referred to as quasi-money instruments or near-money. The following items are generally considered as near money?

1.         Time deposits and saving deposits with commerce banks another banks:

4.         Gilt-edged securities and all other redeemable and marketable government securities 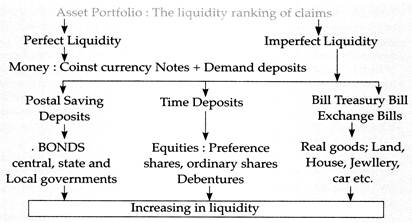 1. To facilitate creation and allocation of credit and liquidity

2.  To serve as intermediaries in the process mobilization of savings in the economy

3.  To provide financial convenience to the people.

4. To assist the process of economic development through a more balanced regional and sectorial distribution of investible funds.

·               The term "money market" refers to the institutional arrangements facilitating borrowing and lending of short term funds. In a money market, funds may be borrowed for periods varying from a day, a week, 3 to 6 months and against different types of instruments such as bills of exchange, short-term securities, banker's acceptances etc. called near money".

Constituents of the money markets:

Important components of the money market are as follows:

1.          Call Money Market:  the market for extremely short-period loans is referred to as the "call money markets". Bill brokers and dealers in stock exchange usually borrow money at call loans from the commercial banks.

2.          Call money market: It is a market where short term surplus funds of Commercial banks and other financial institutions are traded. The issuers of call money or the borrowers are Commercial banks. Co-operative banks, financial institutions and Discount and Finance House of India. These participants usually borrow and lend call/notice money for one day for period upto 14 days. If money is lent for a day it is called call money or overnight money on the other hand, if it is for a period more than one day and less than 14 days, it is called notice money. Scheduled Commercial banks are the large scaled borrower and lenders in the call money market.

4.          Acceptance Market: It refers to the market for banker's acceptances involved in trade transactions. A banker's acceptance is a draft drawn by an individual or firm upon a bank ordering it to pay to the order of a designated party or to bearer a certain sum of money at a particular future date and this draft is accepted by the bank. Banker's acceptances can be easily sold or discounted in the money market called the acceptance market.

5.          Bill Market: It is a market in which short-term papers or bills are bought and sold. The most important types of short term papers are the bills of exchange and the treasury bills.

Structure of the Indian Money Market:

2.            The Unorganized sector: the unorganized sector   contains agencies which have diverse policies, lack of uniformity and consistency in the lending business. It includes indigenous bankers, money lenders and chit funds

·               There are two broad categories of indigenous financial agencies representing the unorganized sector of the Indian money market. These include?1. Money-lenders 2. Indigenous Bankers

·               Indigenous banker is defined as "any individual or private firm receiving Deposits and dealing in hands or lending money.

1. They accept deposits on current and fixed accounts

2. They buy and sell hundis for remitting funds

3. They accept valuables of their clients for safe custody

4. They finance inland trade, including the movement of agricultural commodities like cotton, sugar, oil seeds etc. but, they do not give direct loans to farmers.

5. They give loans to artisans and small urban traders against collateral security or personal security.

·               Monetary policy is usually defined as the central Banks policy pertaining to the control of the availability, cost and use of money and credit with the help of monetary measures in order to achieve specific goals.

·               In its positive aspect it sets out the promotional role of central banking in improving the savings ratio and expanding credit for facilitating capital formation.

·               In its Negative approach. It implies a regulatory phase of restricting credit expansion and its allocation according to the absorbing capacity of the economy.

·               According to crofter a state in which the value of money is falling i.e. prices are rising. The common feature of inflation is a price rise the degree of which may be measured by price indices.

·               Rowan suggests the following formula to measure the percentage rate of inflation: 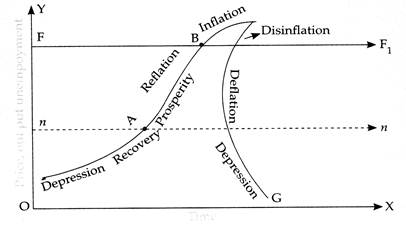 Fig: Model of a Trade cycle

·               Inflation occurs when prices rise after the stage of full employment is reached in the economy, with no corresponding rise in employment and output.

The following are the main characteristic of inflation

2. Inflation is a process of persistently rising price level.

3. Inflationary price rise is persistent and is irreversible within a short time.

4. A cyclical movement is not inflation. Inflation is  rising trend in the price level.

5. Inflation is endogenous to the economic system.

6. Inflation is a post full employment phenomenon and Monetary phenomenon.

Reflection:  It is a situation of rising prices, deliberately undertaken to relieve a depression with rising prices, employment, output and income also increase till the economy reaches the fall employment ceiling.

·               However, till the economy reaches the point B, price rise is accompanied by the expansion of employment and output. This situation is called "Semi inflation" or "reflation".

Disinflation:  When prices are falling due to anti-inflationary measures adopted by the authorities with no corresponding decline in the existing level of employment, output and income the result is disinflation.

Deflation: It is a condition of falling prices accompanied by a decreasing level of employment, output and income.

·               Deflation is just the opposite of inflation. Deflation occurs when the total expenditure of the community is not equal to the existing prices. The value of money goes up and prices fall.

·               However Each and every fall in price cannot be called deflation. The process of reversing inflation without either creating unemployment or reducing output is called disinflation and not deflation. 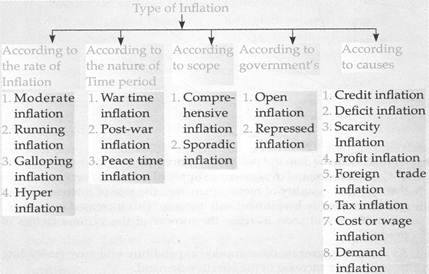 Hyperinflation is inflation that is "out of control" a condition in which price increases rapidly as a currency loses its value. The main cause of hyperinflation is a massive and rapid increase in the amount of money, which is not supported by growth in the output of goods and services.

The main features of hyperinflation are ?

1. During hyperinflation, the price rise severe. The rice index moves up by leaps and bounds.

2. It represents the most pathetic deterioration in people's purchasing power.

3. It is apparently generated by a massive fiscal dislocation.

4. It is amplified by wage price spiral.

5. Hyperinflation is a monetary disease.

6. The velocity of circulation of money increases very   fast.

7. The structure of the relative prices of goods become highly unstable. 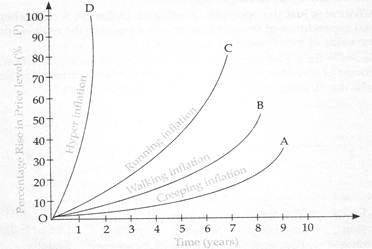 ·               According to the demand pull theory, prices rise in response to an excess of aggregate demand over existing supply of goods and services. In this theory when quantity of money increases, the rate of interest will fall and consequently investment will increase. This increased investment expenditure will soon increase the income of the various factors of production.

As a result, aggregate consumption expenditure will increase leading to an effective increase in the effective demand.

·               Demand pull inflation is a situation where the total monetary demand persistently exceeds total supply of goods and services at current prices, so that prices are pulled upward by the continuous upward shift of the aggregate demand function.

3. Increase in marginal propensity to

·               In this inflation, a sustained rise in general price level resulting from an autonomous rise in cost. In other words, cost push inflation is another type of inflation in which price rise is due to increased input costs.

Inflation is a complex phenomenon which can be attributed to a single factor Major causes of inflation are as follows:

1. Over expansion of money supply

(a) A high population growth

Control of inflation: in modern economy following are the broad categories of instruments commonly used in control inflation. Monetary policy:

1.            Monetary policy:  Monetary policy used to control inflation is based on the assumption that a rise prices (inflation) is due to excess of monetary demand for goods and services by the people because easy bank credit is available to them.

Both these factors affect the components of aggregate demand (Consumption + investment) and the flow of expenditure in the economy.

These are as follows:

(c) Variable reserve ratio to control the volume of credit in an economy.

·               During inflation the government is supposed to counteract an increase in private spending obviously During a period of full employment inflation, the aggregate demand in relation to the limited supply of goods and services is reduced to the extent that government expenditures is curtailed.

Taken to convert an open inflation into a repressed one. Such regulatory measures involve the use of direct control on prices and rationing of scarce goods.

·               The function of price control is a fix a legal ceiling beyond which prices of particular goods may not increase.

1. They can be introduced or changed quickly and easily, hence the effects of these change can be rapid.

2. Direct controls can be more discriminatory than monetary and fiscal controls.

3. There can be variation in the intensity of the operation of controls, from time to time, in different sectors.