Drugs may be a single chemical substance or a combination of two or more different substances. An ideal drug should satisfy the following requirements,

Very few drugs satisfy all the above requirements. Each drug has an optimum dose, below which it has no action and above this level it becomes a poison.

The term chemotherapy, which literally means chemical therapy or chemical treatment was coined in 1913 by Paul Ehrlich, the father of modern chemotherapy. He defined chemotherapy as the use of chemicals (drugs) to injure or destroy infections micro-organisms without causing any injury to the host.

Chemicals (drugs) used in chemotherapy are usually classified according to their action.

(1) Antipyretic : Antipyretic is a drug which is responsible for lowering the temperature of feverish body. The central nervous system, especially the hypothalamus, plays an important role in maintaining the balance between the heat production and heat loss in order to regulate the body temperature. Hypothalamus is, thus, known as the thermostat of the body.

The antipyretic drug helps to reset the thermostate at normal temperature. Heat production is not inhibited but heat loss is increased by increased peripheral blood flow which increases the rate of perspiration. This causes body to lose heat and subsequently lowers the body temperature.

Aspirin is an important antipyretic. The other antipyretics are phenacetin, paracetamol, novalgin and phenyl butazone.

Aspirin should not be taken empty stomach. Some persons are allergic to aspirin. The usual allergic reaction is rashes on skin, lowering of blood pressure, profuse sweating, intense thirst, nausea and vomitting. Calcium and sodium salts of aspirin are more soluble and less harmful.

The derivatives of p-aminophenol are used as antipyretic. The main limitation of these derivatives is that they may act on red blood cells and thus, they may be harmful in moderate doses. The important derivatives are,

Phenyl butazone is a pyrazolone derivative. Its structure is,

(2) Analgesics : Drugs which relieve or decrease pain are termed analgesics. These are of two types,

(i) Narcotics : These are mainly opium and its products such as morphine, codeine and heroin. These produce analgesia and sleep and in high doses cause unconsciousness. They are very potent drugs and their chronic use leads to addiction.

(ii) Non-narcotics : These are the drugs which are not potent and do not cause addiction. Common drugs are aspirin and analgin. These drugs also have antipyretic properties. 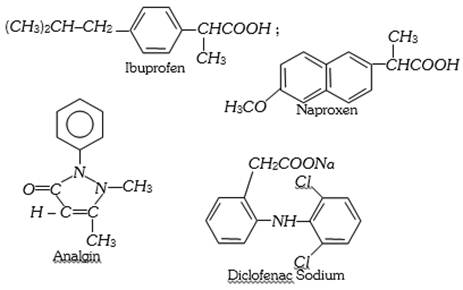 (3) Antimicrobials : These are the chemical substances used to cure infections due to micro-organisms. These are also called microbes. Any organism which causes disease is called pathogen.

The control of microbial diseases can be achieved by the following three ways,

(i) By drugs which kill the organism in the body (bactericidal).

(iii) By increasing immunity and resistance to infection of the body (immunity).

Antimicrobial substances may be synthetic chemicals like sulphonamides, paraamino salicylic acid or they may be antibiotics like tetracycline, penicillin, chloramphenicol, etc.

The common example of antimicrobial drug is sulphanilamides which are effective in wide range of micro-organisms. These are structural analogues of p-amino benzoic acid. 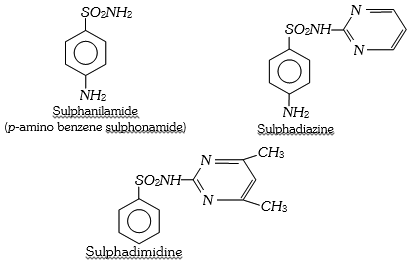 Sulphonamides in combination with trimethoprim are preferred in the treatment of infections of urinary tract.

(i) Antiseptics : The chemical substances which are used to kill or prevent the growth of micro-organisms are called antiseptics. These are not harmful to living tissues and can be safely applied on wounds, cuts, ulcers, diseased skin surfaces. These are also used to reduce odours resulting from bacterial decomposition of the body or in the mouth. They are, therefore mixed with deodorants, face powders and breath purifiers. We all must be familiar with antiseptic creams like furacin, soframycin etc.

The common examples are,

(b) Dettol is an antiseptic. It is a mixture of chloroxylenol and terpeneol in a suitable solvent. Chloroxylenol has both antiseptic and disinfectant properties.

(c) Bithional is antiseptic which is generally added to medicated soaps to reduce the odour produced by bacterial decomposition of organic matter on the skin.

(d) Iodine is powerful antiseptic. It is used as a tincture of iodine which is 2-3% iodine solution of alcohol-water.

(e) Low concentrations of sulphur dioxide are used for sterilizing and preservation of squashes.

(f) A dilute aqueous solution of boric acid is used as a weak antiseptic for eyes. It also forms a part of antiseptic baby talcum powders.

(g) Iodoform is also used as an antiseptic powder for wounds.

(i) Hexachlorophene is mainly used in soaps, creams, dusting powders and emulsions.

(j) Amyl metacresol (5-methyl-2-pentyl phenol) is an antiseptic which is used commonly as a mouthwash or gargles in infections of the mouth and throat.

(k) A naturally occurring phenol derivative, thymol is used as a powerful disinfectant than phenol.

(l) Some organic dyes are also effective antiseptics. These are used for the treatment of infectious diseases. The common examples of antiseptic dyes are gention violet and methylene blue.

(5) Antibiotics : A chemical substance produced by or derived from living cells which is capable of inhibiting the life processes or even destroying micro-organism is called Antibiotics.

The first antibiotic, discovered by Alexander Fleming in 1929 from the mould penicillium notatum, was penicillin. In 1938, Ernst Chain and Howard Florey isolated penicillin in pure form and proved its effectiveness as an antibiotic. It was introduced into medical practice in 1941. Penicillin is used against large number of infections caused by various cocci, gram positive bacteria, etc. It is an effective drug for pneumonia, bronchitis, sore throat and abcesses.

The commonly used antibiotics are :

(i) Streptomycin : It was discovered in 1944 by Waksman. It is effective against tuberculosis. It is also used for other common infections like throat, lungs, ears and kidney. It is very effective in the treatment of meningitis and pneumonia. Streptomycin is an amino base and forms salts that are very soluble in water. The sulphate and calcium chloride double salts are white amorphous powders. The molecule contains two strongly basic quanido groups and a weakly basic methylamino group.

Streptomycin is rapidly absorbed after intramuscular injection. Oral administration of streptomycin is of no value in the treatment.

(ii) Chloramphenicol : It is a broad spectrum antibiotic. It was first isolated from a species of streptomyces. It has been produced synthetically on commercial basis. It is white or greyish white needle like crystalline substance. It has a bitter taste. One gram of chloramphenicol is soluble in about 400 ml of water. It is freely soluble in alcohol.

It is effective against certain gram-positive and gram-negative bacteria, some rickettsiae and viruses. It is very effective in the treatment of typhoid fever, para-typhoid fevers, diarrhoea and dysentary. It is also specific for influenza, meningitis, pneumonia, whooping cough and urinary tract infection.

Chloramphenicol may cause serious complications and hence it should not be used indiscriminately or for minor infections. Chloramphenicol in high concentrations inhibits the growth of animal and plant cells. 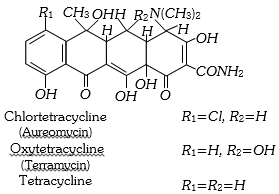 Tetracyclines are broad spectrum antibiotics and are effective against a number of types of bacteria, larger viruses, protozoa, parasites and typhus fever. These can be given orally.

(6) Sulpha drugs : These are synthetic chemotherapeutic agents which contain sulphonamide, –\[S{{O}_{2}}N{{H}_{2}}\] group in their structure. These were the first effective chemotherapeutic agents to be widely used for the cure of bacterial infections in humans. They have also been found to be active against gram-positive and gram negative cocci, bacilli and protozoa. At present sulphanilamides have been largely replaced by antibiotics for the treatment of most of the bacterial diseases. Some successful sulphanilamides are given below, 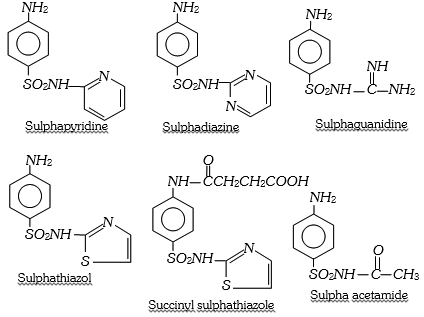 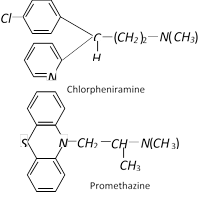 (8) Anaesthetics : It may be defined as those drugs which produce insensibility to the vital functions of all types of cell especially of nervous system. Anaesthetics may be classified into two groups on the basis of their applications,

(i) General anaesthetics : These depress the central nervous system to such an extent that all sensitivity to pain or feeling is lost, i.e., they produce unconsciousness all over the body. These are used for major surgical operations. These may be used in the form of gas, e.g., nitrous oxide, cyclopropane, ethylene, either or may be given in the injection from, e.g., sodium pentothal.

(9) Tranquillizer or Hypnotics : The chemical substances used for the treatment of stress, mild and severe mental diseases are called tranquillizers. These are used to release mental tension and reduce anxiety.

These derivatives are called as barbiturates.

These are also called psychotherapeutic drugs. These drugs make the patient passive and help to control their emotional distress or depression.

The most commonly used tranquillizers are barbituric acid and its derivatives such as veronal, amytal, membutal, seconal and luminal. 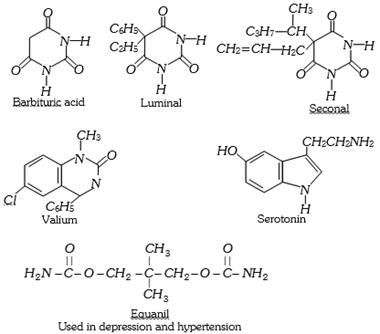 * It may be noted that different terms are used for drugs which are used to cure mental diseases. Some of these terms are ,

(i) Sedatives : These act as depressant and suppress the activities of central nervous system. They are given to patients who are mentally agitated and violent. Sedatives give a feeling of calmness, relaxation or drowsiness in the body. Their high doses induce sleep. The common sedatives are valium, barbiturates (obtained from barbituric acid).

(ii) Antidepressants : These drugs are given to patients with shattered confidence. These produce a feeling of well being and confidence in the person of depressed mood. Therefore, these are also called mood booster drugs. The common examples are vitalin, cocain, methedrine etc.

(10) Anti-Malarials : Malaria is highly wide spread infectious disease, caused by sporozoa of genus plasmodium. It is characterised clinically by periodic fever, anaemia and enlargement of liver and spleen. The four species, Plasmodium vivax, Plasmodium malariae, Plasmodium ovale and Plasmodium falciparum are responsible for malaria in man. Thus, there are four types of malaria,

The chemotherapy of malaria is connected with different stages in the cycle of malarial parasite. The mosquito injects the parasite into the blood of a human being. It immediately goes to the liver cells where it multiplies. Once the parasites have grown in number, these come to blood and enter the red blood corpuscles where they also multiply. Eventually, the red cells burst liberating the parasites as well as toxins. These toxins cause fever, chills and rigour. The liberated parasites attack the fresh red cells and the cycle continues. Depending upon the periodicity of this cycle in the red cells fever comes on alternate days, once in three days or once in four days. Some of the liberated parasites go back to liver and continue the cycle there.

Choice of an antimalarial drug depends on the point of its action on the life cycle of the malarial parasite. Various drugs used are :

(i) Primaquine : It destroys sporozites in the liver. It is too toxic, and its long term use is not advisable.

(ii) Chloroquine, proquanil and pyrimethamine : These kill the parasites in blood.

Oral contraceptives belong to the class of natural products known as steroids.

These control the female menstrual cycle and ovulation. The birth control pills are essentially a mixture of esterogen and progesterone derivatives which are more potent than the natural hormones.

These common pills are used for a combination of progesterone, norethindrone and estrogen ethynylestradiol.

Mifepristone is a synthetic steroid which blocks the effects of progesterone and is used as a "morning after pill" in many countries. 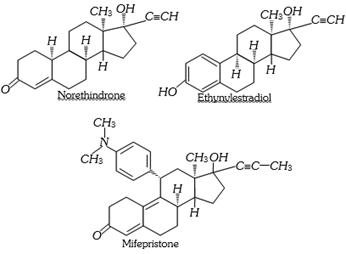 Ormeloxifene (Centchroman, Saheli) has also been developed and tested at the Central Drug Research Institute, Lucknow as an effective antifertility drug to acceptable degree. The oral contraceptives are commonly known as pills or oral pills and have been used worldwide for birth control.

Drugs or Medicines from plants