Dye is a natural or synthetic colouring matter which is used in solution to stain materials especially fabrics. All the coloured substances are not dyes. A coloured substance is termed as a dye if it fulfils the following conditions,

(1) Theory of Dyes : A dye consists of a chromophore group and a salt forming group called anchoric group. In 1876, Otto witt put forth a theory as to correlate colour with molecular structure (constitution). The theory is named 'The Chromophore Auxochrome Theory' and its main postulates are,

(i) The colour of the organic compounds is due to the presence of certain multiple bonded groups called chromophores. Important chromophores are,

The presence of chromophore is not necessarily sufficient for colour. To make a substance coloured, the chromophore has to be conjugated with an extensive system of alternate single and double bonds as exists in aromatic compounds.

The chromophore part of the coloured substance (dye) absorbs some wavelengths from white light and reflects back the complementary colour. A coloured compound having a chromophore is known as chromogen.

(ii) Certain groups, while not producing colour themselves, when present along with a chromophore in an organic substance, intensify the colour. Such colour assisting groups are called auxochromes (Greek word, Auxanien = to increase; Chrome = colour), i.e. they make the colour deep and fast and fix the dye to the fabric. The auxochromes are acidic or basic functional groups. The important auxochromes are,

However, Otto witt chromophore-Auxochrome concept fails to explain the colour of certain dye stuffs like indigo.

(2) Classification of Dyes : Dyes are classified to their chemical constitution or by their application to the fibre.

(i) Classification of dyes according to their chemical structure

(a) Nitro and Nitroso dyes : These dyes contain nitro or nitroso groups as the chromophores and \[-OH\] as auxochrome. A few example are,

(b) Azo dyes : The azo dyes contain one or more azo groups – N=N–, as the chromophore. Azo dyes constitute the largest and most important group of synthetic dyes. These can be prepared by diazotising an aromatic amine and subsequent coupling with a suitable aromatic phenol or amine.

The important azo dyes are the following, 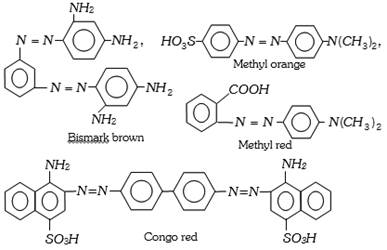 Azo dyes are highly coloured. Azo dyes can be further divided into acid, basic, direct, ingrain or developed dyes, etc., on the basis of mode of application.

(c) Tri aryl methane dyes : In these dyes, the central carbon is bonded to three aromatic rings. One of which is in the quinonoid form (the chromophore). Malachite green is the typical example of this class.

Rosaniline and crystal violet are other two important dyes of this class.

(e) Phthaleins : Products obtained by condensation of phthalic anhydride with phenols in presence of dehydrating agents like conc. \[{{H}_{2}}S{{O}_{4}}\] or anhydrous zinc chloride are called phthaleins.

The other important dyes of this class are,

Another indigo dye is royal blue in colour which is dibromo derivative of indigo. It is called Tyrian blue.

(ii) Classification of dyes according to their application

(a) Direct  dyes : Direct dyes can be directly applied to the fibre, both animal and vegetable, by dipping in hot aqueous solution of the dye. These dyes are most useful for those fabrics which can form hydrogen bonds, i.e., for cotton, rayon, wool, silk and nylon. Martius yellow and congo red act as direct dyes. Examples : Martius yellow, congo red.

(b) Acid dyes : These are usually salts of sulphonic acids and can be applied to wool, silk and nylon. The presence of sulphonic acid group makes them water soluble. These dyes are applied from an acidic bath. The polar acidic groups interact with the basic groups of the fabric. Orange-1 is an excellent acid dye.

(c) Basic dyes : These are the hydrochlorides or zinc chloride salts of colour bases having basic groups. These dyes react with anionic sites present on the fabric to attach themselves. These dyes colour fibers of nylons and polyesters. Aniline yellow. Magenta (Rosaniline) and Malachite green are the examples of basic dyes.

(d) Mordant dyes : These dyes have no natural affinity for the fabric and are applied to it with the help of certain additional substances known as mordants. A mordant (Latin mordere = to bite) is any substance which can be fixed to fabric and reacts with the dye to produce colours on fabric. Three types of mordants are commonly used,

The process of mordant dyeing consists in impregnating the fabric with mordant in presence of wetting agent followed by soaking of the fabric into the solution of dye.

(e) Vat dyes : These dyes are insoluble in water and cannot be applied directly. These dyes on reduction with sodium hydrosulphite \[(NaHS{{O}_{3}})\] in a vat form a soluble compound which has great affinity for cotton and other cellulose fibres. The cloth is soaked in the solution of a reduced dye and then hung in air or treated with oxidants like perboric acid. As a result, the colourless compound is oxidised to insoluble dye which is now bound to the fabric. The colourless and reduced state of the dye is called the Leuco base. The common examples of vat dyes are indigo and tyrian purple. These are mostly used on cotton.

(f) Ingrain dyes (developed dyes) : Ingrain dyes are those which are synthesised directly on the fabric. Examples of this type of dyes are azo dyes. The fabric is immersed in the solution of coupling reagent (usually a phenol or naphthol). Then it is dipped in the solution of suitable diazonium salt. Both react to form the dye whose molecules are adsorbed on the surface of fabric. The ingrain dyeing is particularly suitable for cotton fabrics.

(g) Disperse dyes : These dyes are used to colour synthetic fabrics such as nylon, orlon, polyesters and cellulose acetate which have tightly packed structures. The dyes are dispersed in a colloidal form in water. The fabric is immersed in the colloidal dispersion of the dye when fine dye particles are trapped within the polymer structure of the fabric. Examples of this type of dyes are monoazodye and anthraquinone dye.