(1) Compounds having similar physical and chemical properties but they have the ability to rotate the plane of polarised light either to the right (Clockwise) or to the left (Anticlockwise) are termed as optically active or optical isomers and the property is called optical activity or optical isomerism.

(3) On the basis of the study of optical activity, the various organic compounds were divided into four types :

(i) The optical isomer which rotates the plane of the polarised light to the right (Clockwise) is known as dextrorotatory isomer (Latin: dextro = right) or d-form or indicated by sign.

(ii) The optical isomer which rotates the plane of the polarised light to the left (Anticlockwise) is known as laevorotatory isomer (Latin; laevo = left) or form or indicated by sign.

(iii) The optical powers of the above two isomers are equal in magnitude but opposite in sign. An equimolar mixture of the two forms, therefore, will be optically inactive due to external compensation. This mixture is termed as racemic mixture or dl-form ormixture.

(4) Chirality, (i) Definition : A molecule (or an object) is said to be chiral or dissymmetric, if it is does not possess any element of symmetry and not superimposable on its mirror image and this property of the molecule to show non-superimposability is called chirality.

On the other hand, a molecule (or an object) which is superimposable on its mirror image is called achiral (non-dissymmetric or symmetric).

To understand the term chiral and achiral let us consider the alphabet letters ‘P’ and ‘A’ whereas ‘P’ is chiral, ‘A’ is achiral as shown in fig.

(a) Plane of symmetry : It may be defined as a plane which divides a molecule in two equal parts that are related to each other as an object and mirror image. e.g.,

(b) Centre of symmetry : It may be defined as a point in the molecule through which if a line is drawn in one direction and extended to equal distance in opposite direction, it meets another similar group or atom, eg.

Since trans form contains a centre of symmetry, it is optically inactive. 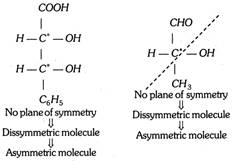 (iv) Chiral or asymmetric carbon atom : A carbon bonded to four different groups is called a chiral carbon or a chirality centre. The chirality centre is indicated by asterisk. e.g.,

(5) Calculation of number of optical isomers

(ii) If molecule is divisible into two identical halves, then the number of configurational isomers depends on the number of asymmetric carbon atoms.

Any molecule having one asymmetric carbon atom exists in two configurational isomers which are nonsuperimposible mirror images.

Mode of rotation : One enantiomer rotates light to the right and the other by an equal magnitude to the left direction.

(ii) Racemic Mixture : An equimolar mixture of two enantiomers is called a racemic mixture (or racemate, \[\pm \] form, (dl) form or racemic modification). Such a mixture is optically inactive because the two enantiomers rotate the plane polarised light equally in opposite directions and cancel each other’s rotation. This phenomenon is called external compensation.

\[\Rightarrow \]The conversion of \[(+)\] or \[(-)\] form of the compound into a racemic mixture is called racemisation. It can be caused by heat, light or by chemical reagents.

Case I : When molecule is not divisible into two identical halves.

The number of optical isomers possible in this case is four \[(a={{2}^{2}}=4)\]. Further there will be two pairs of enantiomers and two racemic modifications. In practice also it is found to be so.

Configurational isomers which are not mirror images are known as diastereomers.

Properties of Diastereomers : Diastereomers have different physical properties, e.g., melting and boiling points, refractive indices, solubilities in different solvents, crystalline structures and specific rotations. Because of differences in solubility they often can be separated from each other by fractional crystallisation; because of slight differences in molecular shape and polarity, they often can be separated by chromatography.

Case II : When molecule is divisible into two identical halves.

(i) Allenes : Allenes are the organic compounds of the following general formulae. 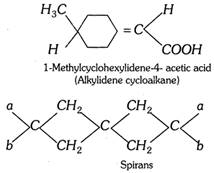 (iii) Biphenyls : Suitably substituted diphenyl compounds are also devoid of individual chiral carbon atom, but the molecules are chiral due to restricted rotation around the single bond between the two benzene nuclei and hence they must exist in two non-superimposable mirror images of each other. Such types of stereoisomerism which is due to restricted rotation about single bond, is known as atropisomerism and the stereoisomers are known and atropisomers. Examples

(9) Fischer projection formulae : The arrangement of the atoms or groups in space that characterises a stereoisomer is called its configuration.

By convention, the following points are followed in writing the Fischer formula.

(i) The carbon chain of the compound is arranged vertically, with the most oxidised carbon at the top.

(ii) The asymmetric carbon atom is in the paper plane and is represented at the interaction of crossed lines.

(iv) Horizontal lines represent bonds coming towards the observer, i.e., groups attached to the horizontal lines are understood to be present above the plane of the paper.

(i) D,L. System of nomenclature : This nomenclature is mainly used in sugar chemistry or optically active polyhydroxy carbonyl compounds. This nomenclature was given by Emil Fischer to designate the configurations of various sugars relative to the enantiomeric \[(+)\] and \[(-)\]glucose as reference.

\[\Rightarrow \]This nomenclature is also used in \[\alpha \]-amino acids.

(a) Only two chiral carbons and

i.e., out of six substituents on two asymmetric carbons, at least two should be same.

When two like groups in Fischer projection formula are drawn on the same side of the vertical line, the isomer is called erythro form; if these are placed on the opposite sides, the isomer is said to be threo form.

The order of arrangement of four groups around a chiral carbon (stereocentre) atom is called the absolute configuration around that atom. System which indicates the absolute configuration was given by three chemists R.S. Cahn, C.K. Ingold and V. Prelog. This system is known as (R) and (S) system or the Cahn-Ingold Prelog system. The letter (R) comes from the latin rectus (means right) while (S) comes from the latin sinister (means left). Any chiral carbon atom has either a (R) configuration or a (S) configuration. Therefore, one enantiomer is (R) and other is (S). A racemic mixture may be designated (R) (S), meaning a mixture of the two. (R) (S) nomenclature is assigned as follows :

Step I : By a set of sequence rules given below the atoms or groups connected to the chiral carbon are assigned a priority sequence.

Sequence Rules for Order of Priority 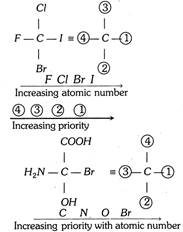 Rule 2 : If two or more than two isotopes of the same element is present, the isotope of higher atomic mass receives the higher priority.

Rule 3 : If two or more of the atoms directly bonded to the chiral carbon are identical, the atomic number of the next atoms are used for priority assignment. If these atoms also have identical atoms attached to them, priority is determined at the first point of difference along the chain. The atom that has attached to it an atom of higher priority has the higher priority.

Rule 4 : If a double or a triple bond is linked to chiral centre the involved atoms are duplicated or triplicated respectively.

By this rule, we obtained the following priority sequence :

Step 2 : The molecule is then visualised so that the group of lowest priority (4) is directed away from the observes (At this position the lowest priority is at the bottom of the plane). The remaining three groups are in a plane facing the observer. If the eye travels clockwise as we look from the group of highest priority to the groups of second and third priority (i.e., \[1\to 2\to 3\]with respect to 4) the configuration is designated as R. If arrangement of groups is in anticlocwise direction, the configuration is designated as S.

Let us apply the whole sequence to bromochlorofluoro methane.

In this Fischer projection the least priority number is not at the bottom of the plane.

First interchange of two groups at the chiral centre inverts the configuration and this gives enantiomer of the original compound. Thus (A) and (B) are enantiomer. The second interchange involves the remaining two groups. 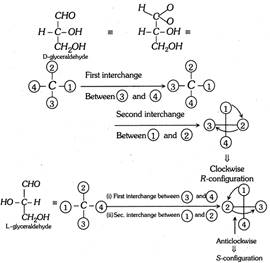 Glyceraldehyde (For example) has one asymmetric carbon, hence it has two configurational isomers (I) and (II).

One can draw a number other configurations for glyceraldehyde but each of them will be a repetition of either (I) or (II). In this connection it is important to note that if two projection formulae differ by an odd number of interchanges (1, 3, 5, 7, …..) of positions of groups on the chiral carbon, they are different. But if the two differ by an even number of interchanges (2, 4, 6, …..) they are identical.

(i) Asymmetric synthesis : The synthesis of an optically active compound (asymmetric) from a symmetrical molecule (having no asymmetric carbon) without resolution to form \[(+)\] or  \[(-)\] isomer directly is termed asymmetric synthesis. For example the reduction of pyruvic acid \[(C{{H}_{3}}-\overset{O}{\mathop{\overset{|\,|}{\mathop{C}}\,}}\,-COOH)\] in presence of nickel catalyst gives \[(\pm )\]lactic acid (racemic mixture). On the other hand, pyruvic acid is reduced to \[(-)\] lactic acid only by yeast. 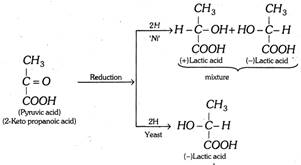 (ii) Walden inversion: The conversion of \[(+)\] form into \[(-)\]form and vice-versa is called Walden inversion. When an atom or group directly linked to an asymmetric carbon atom is replaced; the configuration of the new compound may be opposite to (inverse) that of the original, i.e.,