The image formed by a plane mirror is virtual, erect, laterally inverted, equal in size that of the object and at a distance equal to the distance of the object in front of the mirror.

(2) Images by two inclined plane mirrors : When two plane mirrors are inclined to each other at an angle \[\theta ,\] then number of images (n) formed of an object which is kept between them. 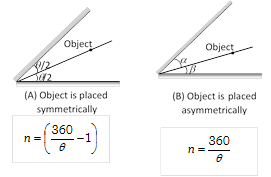 (ii) When mirror moves towards the stationary object with speed u, the image will move with speed 2u in same direction as that of mirror.

(iii) A man of height h requires a mirror of length at least equal to h/2, to see his own complete image.

(iv) To see complete wall behind himself a person requires a plane mirror of at least one third the height of wall. It should be noted that person is standing in the middle of the room.