Transistor as an Oscillator

(2) In an oscillator the frequency, waveform, and magnitude of ac power generated is controlled by circuit itself.

(3) An oscillator may be considered as amplifier which provides it's own input signal.

(4) The essential of a transistor oscillator are

(ii) Amplifier : It receives dc power from the battery and converts into ac power. The amplifier increases the strength of oscillations.

(iii) Feed back circuit : This circuit supplies a part of the collector energy to the tank circuit.

(5) A basic common-emitter NPN oscillator is shown in the figure. 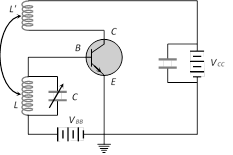