Twins: Two birth occurring at the same time in human are called twins, they are of peculiar genetic interest. The hereditary basis of a number of human traits has been established by the study of twins. There are 3 kinds of twins.

(i) Identical or monozygotic twins: Identical twins are formed when one sperm fertilizes one egg to form a single zygote. As a result of separation of two daughter cells or blastomeres after the first cleavage, each of the cell develops into a separate individual. Such individuals are called identical twins. Since they develop from a single zygote, they are called monozygotic twins. They have the same genotype and phenotype and are of same sex. Differences if any, may be due to different environmental conditions.

(ii) Siamese twins or conjoint twins: Like monozygotic twins, siamese twins also originate from one zygote but the daughter cells formed as a result of first cleavage fail to separate completely and they remain joined at some point. They grow into two individuals joined together. Thus the two individuals called conjoint twins remain attached at one or more parts of the body. They were first studied in the country Siam, hence called Siamese twins. Siamese twins usually do not survive after birth although a few cases of their survival are well known. They are always of the same sex, same genotype and phenotype.

(iii) Fraternal twins: They are dizygotic twins formed from the two eggs fertilized by two sperms separately but at the same time. They may be both males, both females or one male and one female. They may have different genotypic constitution and different phenotype. Thus fraternal twins develop in same environment with different constitution but are the members of same age. They resemble each other just like any two brothers and sisters. Although they may be of same sex but due to different hereditary traits, they may carry congenital variations. 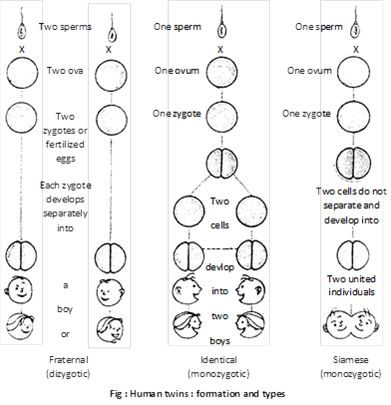 (i) Eugenics: The term eugenics (Gr. Eugenes, well born) was coined by British scientist Sir Francis Galton in 1883. Galton is called ‘Father of eugenics’ as this branch has been started by him.

Eugenics is the branch of science which deals with improvement of human race genetically. This aspect of human betterment aims to improve the human germplasm by encouraging the inheritance of best characteristics so that defective characters may be eliminated. Eugenics attempts to attain its objective bilaterally by suggesting a number of ‘do’s and ‘don’ts’ to improve the human gene pool. The ‘don’ts’ are meant to check inheritance of the poor or undesirable germplasm, while the do’s aim at perpetuating desirable germplasm to be inherited. By this method aim of improvement of human race may be achieved by two ways :

(a) Positive eugenics : In this approach of eugenics the future generations are improved by encouraging the inheritance of better traits. Following methods may be adopted to achieve this.

(2) Perevention of loss of good germplasm : Many intelligent, specialists, educationists and politicians with better traits should be encouraged getting marriage at early stage and practice polygamy may contribute for more and more utilization of good germplasm.

(5) Genetic counselling : Production of healthy progeny should be the endeavour of man to ensure a better future for humanity. Genetic counselling can make a significant contribution in this direction. It can provide much needed relief for families with history of genetic diseases. Genetic counselling is even useful after marriage. A Rh- woman with Rh+ partner when aware of the implications in the second child, can go for suitable medical aid well in advance.

(b) Negative eugenics : This is a negative aspect of improving mankind by restricting the transmission of poor and defective germplasm. This restriction can be brought about in the following ways.

(1) Segregation : Persons with serious abnormal hereditary defects like feeble mindedness, epilepsy, leucoderma, criminals, immorals and stupid people, should be isolated i.e. should not be permitted to mingle and marry with normal, intelligent persons.

(2) Restriction on blood marriages : Marriage between close relative like cousins tend to bring together the recessive alleles in homozygous condition and can be expressed in haemophilia, albinism and colour blindness.

(3) Sterilization : The most effective method to stop the persons with defective germplasm to produce offsprings is the sterilization. This prevents the transmission of undesirable traits in man and woman by vasectomy and tubectomy respectively.

(ii) Euthenics : Euthenics is the improvement of human race by improving the environmental conditions, i.e., by subjecting them to better nutrition better unpolluted ecological conditions, better education and sufficient amount of medical facilities.

(a) Better education: Education is one of the surest agents which can provide better humanity. The conditions of surroundings i.e. the immediate environment of an individual has a great bearing upon personality of the person. The society which an individual chooses determines to some extent, his character. Medical facilities are largely responsible for maintenance of sound health. Employment conditions determine the degree of fulfillment of the individual’s basic requirements and hence it influences his entire outlook. Euthenics attempts to provide the best of education, the healthiest of surroundings, the finest of societies, full medical facilities and rewarding employment conditions.

(b) Subsidization of superior students : Euthenics requires that a best student be selected and be provided opportunities for his multifaceted development. Students of no definite class and group may be equally intelligent. A few are most intelligent, some are average, still others are below average and some are dull or feeble minded or idiots. A definite scale to measure the mental ability has been prescribed which is known as intelligence quotient.

By applying this formula we can easily calculate the IQ, such as if a 10 year child has mental age 14, his IQ will be

On the basis of different levels of I.Q. persons are classified as follows.

(iii) Euphenics : The study of born defectives and their treatment is called euphenics. The term euphenics was given by A.C. Pai (1974) for symptomatic treatment of human genetic disease especially in born errors of metabolism. Following methods can be employed as euphenic measures.

(a) Amniocentesis : It is a test to detect genetic diseases as well as the sex of embryo during development in mother’s womb. Amniotic fluid is tested and if embryo has genetic disease the embryo can be aborted.