Introduction: Gregor Johann Mendel (1822-1884) first "geneticist", also known as father of genetics was born in 1822 in Silisian, a village in Heizendorf (Austria). In 1843, he joined Augustinian monastry at Brunn (then in Austria, now Brno Czechoslovakia). In 1856, Mendel got interested in breeding of Garden pea (Pisum sativum). He selected pure breeding varieties or pure lines of pea. Breeding experiments were performed between 1859 - 1864. The results were read out in two meetings of Natural History Society of Brunn in 1865 and published in 1866 in "Proceedings of Brunn Natural History Society" under the topic "Experiments in Plant Hybridisation". Mendel died in 1884 without getting any recognition during his lifetime.

In 1900, Hugo de Vries of Holland, Carl Correns of Germany and Erich von Tshermak of Austria came to the same findings as were got by Mendel. Hugo de Vries found the paper of Mendel and got it reprinted in ‘Flora’ in 1901. Correns converted two of the generalisations of Mendel into two laws of heredity. These are law of segregation and law of independent assortment.

(1) Reasons for Mendel’s success: The reasons of his success can be discussed as follows:

(i) Method of working: He maintained the statistical records of all the experiments and analysed them. He selected genetically pure (pure breed line) and purity was tested by self-crossing the progeny for several generations.

(ii) Selection of material: Mendel selected garden pea as his experimental material because it has the following advantages.

It was an annual plant. Its short life-cycle made it possible to study several generations within a short period and has perfect bisexual flowers containing both male and female parts. The flowers are predominantly self-pollinating because of self-fertilization, plants are homozygous. It is, therefore, easy to get pure lines for several generations and also easy to cross because pollens from one plant can be introduced to the stigma of another plant by removing anthers (emasculation) and bagging. In addition to that there was one reason more for his success. He studied seven pairs of characters which were present on four different pairs of chromosomes.

(iii) Selection of traits: Mendel selected seven pairs of contrasting characters as listed in the table. Luckily all were related as dominant and recessive.

(i) Monohybrid cross: Experiments with garden pea for single pair of contrasting characters.

(b) Mendel’s explanation: Mendel explained above results by presuming that Tallness and darkness are determined by a pair of contrasting factors or determiners (now these are called genes). A plant is tall because it possesses determiners for tallness (represented by T) and a plant is dwarf because it has determiners for darkness (represented by t). These determiners occur in pairs and are received one from either parent. On the basis of this behaviour the tallness is described as dominant character and dwarfness as recessive (law of dominance). The determiners are never contaminated. When gametes are formed, these unit factors segregate so that each gamete gets only one of the two alternative factors. When \[{{F}_{1}}\] hybrids (Tt) are self-pollinated the two entities separate out and unite independently producing tall and dwarf plants (law of segregation). 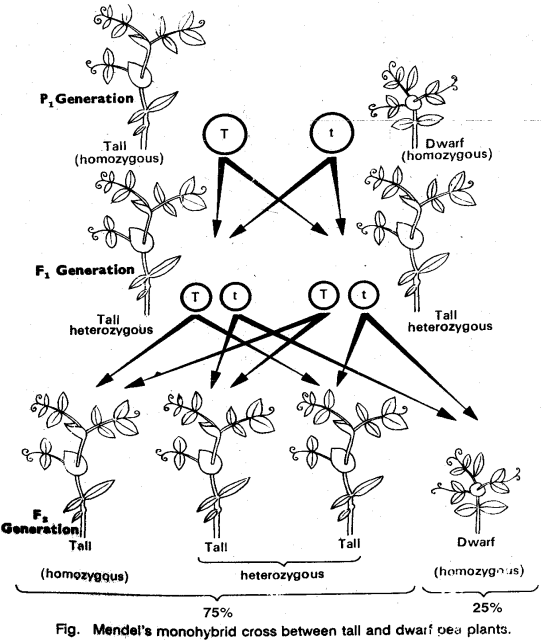 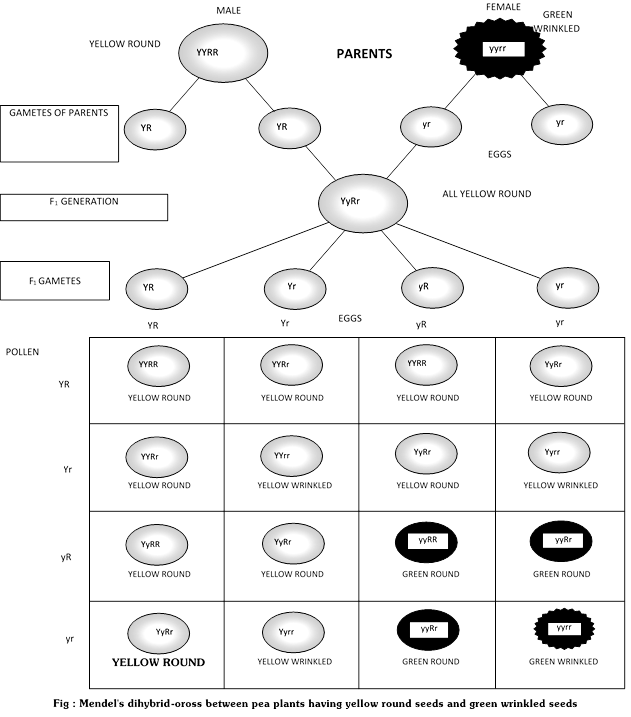 (a) Procedure: Later on Mendel conducted experiments to study the segregation and transmission of two pairs of contrasting characters at a time. Mendel found that a cross between round yellow and wrinkled green seeds \[({{P}_{1}})\] produced only round and yellow seeds in \[{{F}_{1}}\] generation, but in \[{{F}_{2}}\] four types of combinations were observed. These are

The results can be represented as follows:

Mendel represented round character of seed by R and wrinkled by r. Similarly he designated the yellow character by Y and green by y. Therefore, it was a cross between RRYY and rryy.

(b) Mendel’s explanation : Mendel explained the results by assuming that the round and yellow characters are dominant over wrinkled and green so that all the \[{{F}_{1}}\] offsprings are round yellow. In \[{{F}_{2}}\]-generation since all the four characters were assorted out independent of the others, he said that a pair of alternating or contrasting characters behave independently of the other pair i.e., seed colour is independent of seed coat.

Therefore, at the time of gamete formation genes for round or wrinkled character of seed coat assorted out independently of the yellow or green colour of the seed. As a result four types of gametes with two old and two new combinations i.e., RY, ry Ry, rY are formed from the \[{{F}_{1}}\] hybrid. These four types of gametes on random mating produced four types of offsprings in the ratio of 9:3:3:1 in \[{{F}_{2}}\] generation (Law of Independent Assortment). 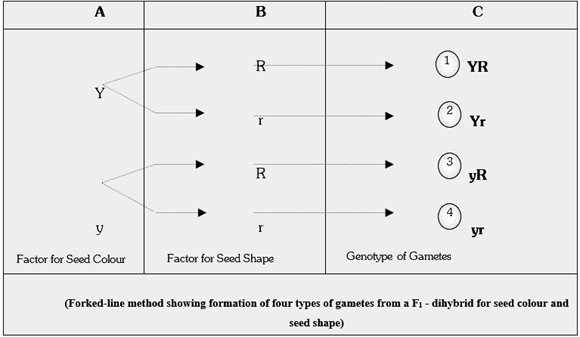 (b) Law of independent assortment: If the inheritance of more than one pair of characters (two pairs or more) is studied simultaneously, the factors or genes for each pair of characters assort out independently of the other pairs. Mendel formulated this law from the results of a dihybrid cross.