(ii) Parturition: It is the expelling of the fully formed young from the mother’s uterus after the gestation period (about 280 days in human female). 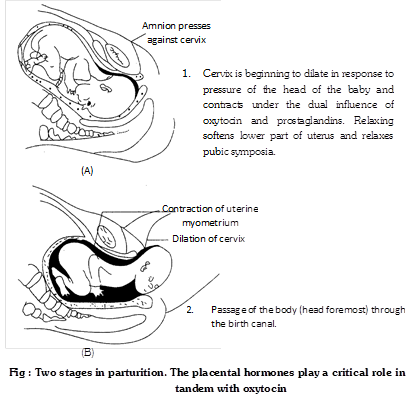 (a) Mechanism: A developing foetus secretes hormones from its adrenal glands. These hormones diffuse into the maternal blood and accumulate to stimulate the release of oxytocin (birth hormone) from the mother’s posterior pituitary. Oxytocin causes the forceful contraction of smooth muscles of myometrium, called labour pains which pushes the young gradually out through the dilated cervix (caused by relaxing) and vagina, with the head foremost. It is aided by a reflex (whose centre lies in the lumbar region of spinal cord) and voluntary contraction of abdominal muscles. In the beginning, the labour pains occur once every half or quarter of an hour but soon become more frequent. The foetal membranes burst and amniotic fluid is released but foetal membranes remain behind. This expulsion stage lasts about 20 minutes to one hour. It is followed by placental stage of 10-45 minutes during which the umbilical cord, placenta and foetal membranes are expelled as decidua or after birth. It is because after the child birth, the uterus reduces in size causing detachment of placenta. Umbilical cord is tied and then cut which finally shrinks into a depressed scar called umbilicus or navel. Sometimes, the foetus fails to come out then the baby is delivered by a surgical procedure. Such a baby is called cesarean.

(b) Control: Parturition is controlled by hormones:

(2) Relaxing: Causes widening of pelvis by relaxing the pubic symphysis of the pelvic girdles.