q Formation of fertilization membrane around the ovum.

q Activation of the egg for development.

q During hatching, the young frog is called tadpole larva.

q After 24 hours of hatching, mouth and anus are perforated.

(b) External gill stage of tadpole

q Just above one day after hatching, the external gill stage starts.

q The branchial clefts are perforated and finger-like external gills project from the sides of the head in branchial region.

q External gills are replaced by four pairs of internal gills covered with a fold of skin called operculum.

q Spiracle is present only on the left side of the tadpole.

q During respiration, the water currents enter the mouth, bath the gills of pharynx and exit through the spiracle.

q A tadpole of frog resembles a fish in many features except that the tadpole does not possess paired fins and scales on the body.

q The tadpole cannot survive when exposed to air because its skin is thin and delicate.

q Exposure of tadpole to land leads to dehydration and death.

q First sign of metamorphosis is the appearance of hind limbs.

q End of tadpole in the life history is marked by appearance of forelimbs.

q Development of tongue and teeth.

q Thickening of skin and development of mucous glands. 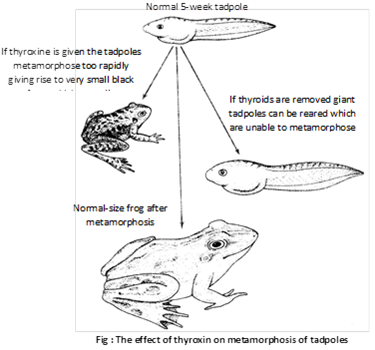 chondrichthyes and larval gills in some adult salamanders.