Formation of protein from mRNA is called translation is also known as polypeptide synthesis or protein synthesis. It is unidirectional process. The ribosomes of a polyribosome are held together by a strand of mRNA. Each eukaryotic ribosome has two parts, smaller 40S subunit (30S in prokaryotes) and larger 60S subunit (50S in prokaryotes). Larger subunit has a groove for protection and passage of polypeptide, site A (acceptor or aminoacyl site), enzyme peptidyl transferees and a binding site for tRNA. The smaller subunit has a point for attachment of mRNA. Along with larger subunit, it forms a P-site or peptidyl transfer (donor site). There are binding sites for initiation factors, elongation factors, translocase, GTPase, etc. The raw materials for protein synthesis are amino acids. mRNA, tRNAs and amino acyl tRNA synthetases.

mRNA: It carries the coded information for synthesis of one (unicistronic) or more polypeptides (polycistronic). Its codons are     recognised by tRNAs.

tRNAs: They picks up specific amino acid from amino acid pool and carrying over the mRNA strand.

Amino Acyl tRNA Synthetases: The enzymes are specific for particular amino acids and their tRNAs. 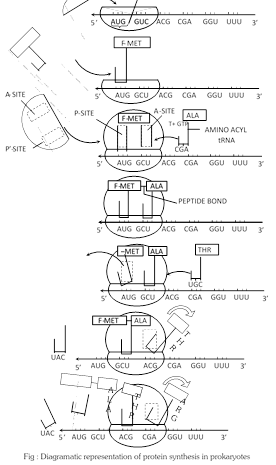 (3) Elongation/chain formation: A new AA-tRNA comes to lie over the A site codon by means of GTP and elongation factor (\[\mathbf{eE}{{\mathbf{F}}_{\mathbf{1}}}\] in eukaryotes, EF-Tu and EF-Ts in prokaryotes). Peptide bond (–CO.NH–) is established between carboxyl group (–COOH) of amino acid of P-site and amino group (\[N{{H}_{2}}\]) of amino acid at A-site with the help of enzyme peptidyl transferase/synthetase.

Connection between tRNA and amino acid of P-site and A-site tRNA comes to bear a dipeptydl. Freed tRNA of P-site slips away. By means of translocase (eEF2 in eukaryotes and EF-G in prokaryotes) and GTP, ribosome moves in relation to mRNA so that peptidyl carrying tRNA comes to lie on P-site and a new codon is exposed at A-site.Incorporation of an amino acid in polypeptide chain thus requires one ATP and two GTP molecules. Peptide formation and translocation continue uninterrupted till the whole m-RNA code is translated into polypeptide. In a polyribosome, when a number of ribosomes are helping in translation of same mRNA code, the ribosome nearest the 5¢ end of mRNA carries the smallest polypeptide and the one towards the 3¢ end the longest. Of course, ultimately the whole polypeptide is formed by each.

(4) Termination: Polypeptide synthesis stops when a nonsense or termination codon [UAA, (ochre), UAG (Amber) or UGA (opal)] reaches A-site. It does not attract any AA-tRNA, P-site tRNA seperates from its amino acid in the presence of release factor \[eR{{F}_{1}}\] in eukaryotes (\[R{{F}_{1}}\] for UAG and UAA, \[R{{F}_{2}}\] for UAA and UGA in prokaryotes).  The completed polypeptide is released, mRNA and ribosome separate. The two subunits of ribosome also dissociate with the help of dissociation factor.

(5) Modification: Formylated methionine present at the beginning of polypeptide in prokaryotes and organelles is either deformylated (enzyme deformylase) or removed from chain (enzyme exopeptidase). Initially the polypeptide is elongated having only primary structure. As soon as the polypeptide comes out the groove of larger ribosome sub-unit, it forms \[\alpha \]-helix (secondary structure) which coils further forming a number of linkages (tertiary structure). Two or more polypeptides may get associated to become \[\beta \]-pleated which then coil to produce tertiary and quaternary structure.