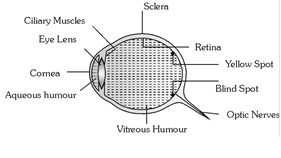 (2) Retina : Real and inverted image of an object, obtained at retina, brain sense it erect.

(3) Yellow spot : It is the most sensitive part, the image formed at yellow spot is brightest.

(4) Blind spot : Optic nerves goes to brain through blind spot. It is not sensitive for light.

(5) Ciliary muscles : Eye lens is fixed between these muscles. It's both radius of curvature can be changed by applying pressure on it through ciliary muscles.

A normal eye can see the objects clearly, only if they are at a distance greater than 25 cm. This distance is called Least distance of distinct vision and is represented by D.

(8) Persistence of vision : Is 1/10 sec. i.e. if time interval between two consecutive light pulses is lesser than 0.1 sec., eye cannot distinguish them separately.