Temperature is defined as the degree of hotness or coldness of a body. It is a scalar quantity Its S.I. unit is kelvin (K). Heat is a form of energy -which causes sensation of hotness or coldness. The flow of heat is always from higher temperature to lower temperature. No heat flows from one body to other, when both the bodies are at the same temperature. The two bodies are said to be in thermal equilibrium. The SI unit of heat is joule. Its CGS unit is calorie, 1 cal = 4.2 joule

A branch of science which deals with the measurement of temperature of a substance is called thermometry. Thermometer is a device used to measure the temperature. Thermometer used for measuring very high temperatures are called pyrometer.

(i) Boyle's law: When temperature is held constant, the pressure is inversely proportional to volume. i.e., \[P\propto \frac{1}{V}\](at constant temperature)

(ii) Charters law: When the pressure is held constant, the volume of the gas is directly porportional to the absolute temperature. i.e., \[V\propto T\](at constant pressure)

When state of a substance changes, change of state takes place at constant temperature (m.pt or b.pt.) heat is released or absorbed and is given by, Q=mL where L is latent heat The SI unit of latent heat is J/kg

(i) Melting: When heat is supplied, solid substance changes into liquid, this change of state of substance is called melting.  \[Solid\xrightarrow{Heat}Liquid\] The temperature at which the solid and the liquid states of a substance coexist in thermal equilibrium with each other is called its melting point.

(ii) Freezing: When heat is released, liquid changes into solid, this change of state of substance is called freezing.

(iii) Condensation: When vapour is cooled, it changes into liquid, this change of state is called condensation

(iv) Evaporation: Conversion of liquid into gaseous state at all the temperatures is called evaporation or boiling.

\[Liquid\xrightarrow{Heat}Vapour\] The temperature at which the liquid and vapour states of a substance consist in thermal equilibrium with each other is called its boiling point. It is a phenomenon that occurs at the surface of liquids. The rate of calibration increases with rise in temperature. Heat required to change unit mass of liquid into vapour at a given temperature is called heat of evaporation at that temperature.

(v) Sublimation: It is the conversion of a solid directly into vapours. \[Solid\xrightarrow{Heat}Vapour\] Sublimation takes place when boiling point is less than the melting point.

(i) A perfectly black body absorbs all the radiant heat incident upon it. (i.e. a=1)

(iii) The coefficient of emission of a perfectly black body is 1. It is very good emitter of heat.

According to Wien's displacement law

Here, constant b is known as Wien's constant

The rate of cooling of a body (rate of loss of heat) is directly proportional to the excess of temp, of the body over the surroundings, provided that this excess is small and loses of heat by radiation only. If \[\theta \] and \[{{\theta }_{0}}\] are the temperatures of the body and its surroundings respectively, then according to Newton's law of cooling, Rate of loss of heat, \[-\frac{dQ}{dt}\propto (\theta -{{\theta }_{0}})\]

The first law of thermodynamics is essentially a restatement of the law of conservation of energy, i.e., energy can neither be created nor be destroyed but may be converted from one form to another. 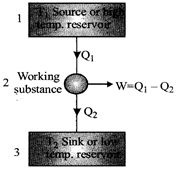 A refrigerator is the reverse of a heat engine. A heat pump is the same as a refrigerato 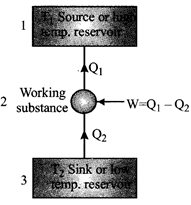