Carbon and Its Compounds

Carbon and Its Compounds

Carbon is a tetravalent element. It can occur either in free state as diamonds, graphite and buckminster fullerene or in the combined state such as carbon dioxide, carbonates, coal, petroleum and organic compounds like carbohydrates, fats and proteins, etc.

The carbon atom chain can be a linear or branched chain which is an open chain.

The carbon atom chain can be cyclic or closed rings, sheets and even three-dimensional lattices. 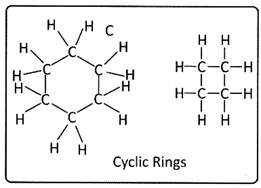 When there are more than three carbon atoms, compounds can be branched. The branched chains provide different structure to the parent alkane and are named differently. For example, in pentane \[({{C}_{5}}{{H}_{12}})\] there exist a straight chain and branched chain called Iso-pentane. Carbon can thus form large number of compounds that have different chain length and structure and are formed by combining with different elements. 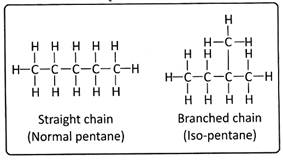 Affinity of Carbon with Other Elements

In chemistry, a homologous series is a series of organic compounds with a similar general formula, possessing similar chemical properties due to the presence of the same functional group and shows a gradation in physical properties as a result of increase in molecular size and mass. For example, ethane has a higher boiling point than methane since it has more intermolecular forces with neighboring molecules. This is due to the increase in the number of atoms making up the molecule. Organic compounds in the same homologous series vary by a\[C{{H}_{2}}\]group.

The names of compounds in a homologous series are based on the name of the basic carbon chain modified by a prefix phrase before or suffix phrase after that indicates the nature of the functional group.

Following method can be used for naming a carbon compound:

Fuels are usually hydrocarbons. Combustion of a fuel is an exothermic chemical reaction. Combustion of a fuel involves chemical reaction between fuel and oxidant that results in the production of heat or both heat and light. In a complete combustion reaction, a compound reacts with an oxidizing element, such as oxygen or fluorine and the products are compounds of each element in the fuel with the oxidizing element.

Carbon compounds can be easily oxidised on combustion. In addition to this complete oxidation, we have reactions in which alcohols are converted to carboxylic acids.

Saturated hydrocarbons are fairly unreactive. However, in the presence of sunlight, chlorine is added to hydrocarbons in a very fast reaction. Chlorine can replace the hydrogen atoms one by one. This type of reaction is called substitution reaction because one type of atom or a group of atoms takes the place of another. A number of products are usually formed with the higher homologous of alkanes.