The carbonyl group is the functional group involved with several of the hydrocarbon derivatives shown above. The carboxyl group is present in amino acids and carboxylic acids.

In chemistry, an alcohol is any organic compound in which a hydroxyl functional group (-OH) is bound to a carbon atom, usually connected to other carbon or hydrogen atoms. An important class are the simple acyclic alcohols, the general formula for which is\[{{C}_{n}}{{H}_{2n+1}}OH\] . Of those, ethanol \[({{C}_{2}}{{H}_{5}}OH)\] is the type of alcohol found in alcoholic beverages, and in common speech the word alcohol refers specifically to ethanol.

The most commonly used alcohol is ethanol, \[{{\mathbf{C}}_{\mathbf{2}}}{{\mathbf{H}}_{\mathbf{5}}}\mathbf{OH}\]. Ethanol has been produced and consumed by humans for millions of years, in the form of fermented and distilled alcoholic beverages. It is a clear flammable liquid that boils at 78.4 °C, which is used as an industrial solvent, car fuel, and raw material in the

chemical industry. In many countries, because of legal and tax restrictions on alcohol consumption, ethanol destined for other uses often contains additives that make it unpalatable poisonous. Ethanol in this form is known generally as denatured alcohol. When methanol is used, it may be referred to as methylated spirits.

They can react to form ester compounds, and they can undergo nucleophilic substitution reactions. The lone pairs of electrons on the oxygen of the hydroxyl group also makes alcohols nucleophiles.

In industry, alcohols are produced in several ways:

To form an ester from an alcohol and a carboxylic acid the reaction, known as esterification, is usually performed at reflux with a catalyst of concentrated sulpuric acid:

In order to drive the equilibrium to the right and produce a good yield of ester, water is usually removed, by an excess of \[{{H}_{2}}S{{O}_{4}}\]. Esters may also be prepared by reaction of the alcohol with an acid chloride in the presence of a base such as pyridine. 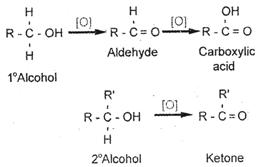 Tertiary alcohols \[({{R}_{1}}{{R}_{2}}{{R}_{3}}C-OH)\] are resistant to oxidation. The direct oxidation of primary alcohols to carboxylic acids normally proceeds via the corresponding aldehyde.

It is then transformed via an aldehyde hydrate \[(R-CH{{(OH)}_{2}})\] by reaction with water before, it can be further oxidized to the carboxylic acid.

The organic acids characterized by the presence of at least one carboxyl group. The general formula of a carboxylic acid is \[R-COOH,\] where R is some monovalent functional group. A carboxyl group is a functional group consisting of a carbonyl \[(RR'C=O)\] and a hydroxyl \[(R-O-H)\] which has the formula, usually written as \[-COOH\] or -\[C{{O}_{2}}H\]. 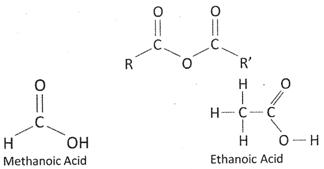 Other important natural examples are citric acid in lemons and tartaric acid in tamarinds.

Acetic acid is an organic compound with the chemical formula \[C{{H}_{3}}COOH\]. It is a colourless liquid, that when undiluted is also called glacial acetic acid. As the main component of vinegar, it has a distinctive sour taste and pungent smell. Although it is classified as a weak acid, acetic acid is highly dangerous to skin.

Reaction of Acetic Acid with Methanol

Acetic acid reacts with methanol in presence of acid catalyst to gives easter.

Ethanoic acid reacts with sodium hydrogen carbonate to given sodium acetate with evolution of carbon dioxide and water.