Fishes are a valuable and easily accessible source of food, rich in protein, highly nutritious and easily digestible. By the aquatic animals, they are abundantly available from sea, rivers, lakes, ponds and marshes.

India has abundant marine and inland fish resources. It has a cost line extending to 4667 Km long and a continental shelf of 2,59,00 square Km offering good scope for fish production. The fish production has increased many folds since India got independence. During 1990-91 the annual fish production of our country has been 38.22 lakh tons. The per capita consumption of fish in India is estimated at 1.51 Kg/year. India is at present the 6th foremost seafood producing nations in the world.

History : From pre-historic period, fishes have used as protein rich diet for human beings. The popularity of fishes has been mentioned in our religious books like Ramayana and Mahabharata also.

In west Bengal, Bihar and orissa, the fish industry is about 1,500 years old. In Bengal every family traditionally has atleast one pond for fishes. 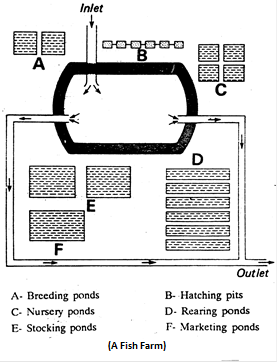 Species Composition and Species Densities : Rearing of dietetically compatible species is one of the fundamental principles in fish culture. The divergent feeding habits of the Indian major carps and of the exotic Chinese carps are therefore taken advantage of in mixed culture. This divergence of feeding habits develop, as stated earlier, from advance fry stage and yet limited over- lapping in feeding habits is but to be expected. In view of this, trials were made with two, three. Four and six species compositions, within which variation in species densities or ratios were also attempted. Some of the combinations tried were as follows :

(1) Natural Breeding Habits : Major carps are essentially river fishes. They normally do not breed in confined waters Major carps breed in rivers throughout monsoon month's i.e. June to August. Major carps exhibit local migration in monsoon months. After travelling some distance against current in flowing waters, they enter shallow marginal inundated waters, where they breed. These fishes do not exhibit any parental care. Ova are small, numerous and fertilization is external. Females lay eggs and the males sprinkle its milt over the eggs which are fertilized by inter-mixing of water, Milt or seminal fluid milky white non-sticky and non-granular. Milt consists of innumerable microscopic structures called spermatozoa. These spermatozoa have small head. During the period of their existance, they are extremely active inhabiting a constant jerking motion.

There is sexual dimorphism in major carps. Females are generally larger than males Following factors are important which influence spawning of major carps.

Optimum temperature seem to be essential for breeding but major carp have known to breed over a wide range of temperature between \[{{4}^{0}}C-{{40}^{0}}C.\] Some have suggested that excessive dissolved oxygen is essential but carps have bred in water where the dissolved oxygen was actually reduced due to mixture of pollutants after the floods. pH from 7.5 to 8.3 are recorded to be suitable for spawning. Turbidity do not seem to be essential for breeding of major carps. Fish spawning induced by lightening and thunder is also doubtful. Cloudy day, however, seemed favourable for breeding of carps. Endocrine and sex stimulating hormone of pituitary gland and series of subsequent physiological changes are important for spawning

(i) Dry Bundh : A dry bundh is a shallow depression enclosed by earthen walls, (locally known as bundh) on three sides and an extensive catchment area on the fourth. Bundhs get flooded during the south-west monsoon, but remain completely dry for a considerable period during the remaining part of the year.

The topography of the land has a great role to play in the location and distribution of the dry bundhs. In bankura district of west Bengal, most of the dry bundhs, are fed with water from storage tanks, constructed in the upland area.

(ii) Wet Bundh : The wet bundh is a perennial pond located on the slope of a vast catchment area of undulating terrain, with proper embankments having an inlet facing towards the upland and an outlet towards the opposite lower ends. During summer, the deeper portion of the pond retains water containing breeders. The remaining portion is dry and is used for agriculture.

(3) Induced breeding : One of the dependable source of quality seed supply is by inducing major carps to breed in ponds by the use of pituitary hormone injections. Pituitary extract for inducing fish to breed is used extensively in many countries. Use of fish pituitary extracts for stimulating spawning of Indian Major carp is met with considerable success in recent years. The cost of seed production by induced breeding is very low as compared to the collection made from natural resources.

The pituitary extract can be kept effectively and utilized successfully in inducing spawing of major carps through injection.

The method of injection of pituitary extract are following types.

(1) Oils : Fish oils are employed in leather industry for chamoising.

Fish body oils are also employed in the manufacture of candles, lubricants, cutting oils etc. Liver oil is a valuable source of vitamin A and Liver oils are of medicinal use.

(2) Fish protein : It is used for edible and industrial purposes.

(3) Fish Meal : It is prepared from the wastes of fish oil or canning industry or from the whole fish of non-oil type. Wastes of cod industry are known as “White fish meal”. The chemical composition of fish meal is.

(4) Fish glue : It is a product mainly of tail regions of fishes such as cod, Haddock, pollack, Hake etc.

(6) Fish fins : The fins of large sized sharks are used for the preparation of soups and further washed into sea water, dusted with wood ashes and lime and finally sun dried to get the cured shining product.

(7) Fish flour : It is highly nutritive food human beings, and prepared commercially by solvent extraction process. It is easily digested by the infants of 3 to 4 months also and is eaten in the form of biscuits, bread cakes, sweets and soup. It has particular odour so it has to be treated chemically to remove the bad smell.

(8) Fish fertilizer : The wastes obtained during the preparation of fish meal is widely used as manure for coffee, tea and tobacco plantation.