Input devices are peripherals which are used to give instructions to computer.

The following are the various types of input devices:

Mouse is a type of input device which basically contains two buttons one on right and another on the left. Using these buttons you can drag any folder or document from one to the other folder. You can also control the movement of the cursor using mouse. Scrolling wheel has been introduces in some of the mouse which helps in scrolling the long document.   The/allowing types of mouse are available in the market:

Basically it contains a metal or a rubber ball in its base side, which generally rolls in any direction. The sensor which is inbuilt is a mechanical sensor which detects the direction of the rolling ball and workout on the movement of the screen pointer accordingly.

It has USB a (Universal Serial Bus) connector which requires a free USB port, if there is no free USB port then it is unable to perform any task on the system.

Optical much advanced comparison to the other mouse. It responds very fast and precisely than any other mouse. In Optical' mouse the beams which are used to detect the movement of the mouse pointer are the laser beams. (See Figure 6.1.5)

The name itself refers its features. Basically it is not connected physically to the system. Instead it works through infrared or radio waves to communicate with the computer and utilizes batteries for its power supply. Generally it is costlier than the other serial mouse.

Joystick is a type of the pointing device which enables user to move an object on the screen in any of the four directions, basically it is known as paddle. It is having spherical ball at both the ends. The upper ball is handled by the user and the lower spherical ball moves in a socket. Joystick is mainly used in CAD (Computer Aided Designing) and in playing computer games. It's mainly used for playing Video Games. (See Figure 6.1.6)

Light Pen works similarly as of mouse but it's basically used to point out for particular task which is taking place anywhere and we are watching it on our televisions. Basically it looks like a Pen shaped that uses light sensor and consists of photocells and an optical system which is placed in a small tube. When the tip of light pen is moved over the monitor screen and the pen button is pressed, its photocells sensing elements detects the location and forward the signal to the CPU (Central Processing Unit). In zeal life, use of a Light Pen can generally be seen while any player is playing in the ground and the technicians are indicating any particular player's position (See Figure 6.1.7) 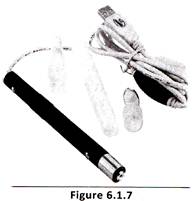 As the term defines the meaning itself. It is a device in which there is no need of using the mouse or pressing any key. Generally it is known as VDU (Visual Display Unit). It's mainly used by ATM (Automated Teller Machine), multimedia mobiles, hotels and airports as well as in the malls while shopping to convey information to the visitors. (See Figure 6.1.8)

It is a device through which a user can directly give any command via voice without using keyboard. Generally the Voice Input System is also known as speech recognition system which learns how a particular user uses the information and pronounces the words about the speech pattern to guess how words are being spoken.

Barcode Reader is an optical input device that is used to read the values or quantities printed on the products in the form of vertical bars known as bar codes. It uses a laser beam to read and interpret bar code. (See Figure 6.1.9)

Scanner is an input device which captures a text document or an image and converts t into a digital image. There are two types of scanners which are very popular, handheld scanners and flatbed scanners. A flatbed scanner has a glass pane. When the images are placed on this pane a bright light illuminates the pane and the scanner head moves across the image. It reads as a series of light and dark spots. 3nly charge coupled devices can see the image because the light is reflected on mat device. If the image is transparent, flatbed scanner cannot work in this way, it enquires special accessories that illuminate it from the upper side. Handheld scanners works like a manual device. When the scanning starts, it drags across the surface. It has a Start button which is held by the user for the scanning duration. Some handheld scanners also have a small window that is used for scanning the document.

Mouse is an input device which is used to give instructions to computer. There are various types of mouse, such as Serial mouse. Which one of the following types of mouse contains rubber ball?

(C) Mechanical mouse contains a metal or a rubber ball in its base side which generally rolls in any direction.

Rest of the options is incorrect.

Which one of the following mouse works through infrared or radio waves to communicate with computer?

(A) Serial mouse contains a serial connector to connect with computer.

(C) Mechanical mouse contains a metal or a rubber ball in its base side, which generally rolls in any direction.

While playing video game you need to use a special type of input device. Which one of the following devices is used to play video game?

(D) Joystick is a type of pointing device which enables user to move an object on the screen in any of the four directions. It is used to play video game.

(A) Mouse is a pointing device. Using mouse you can drag any folder or document from one to the other folder.

(B) Cordless mouse is also used to perform the function given in option a.

(C) Light Pen works similarly as of mouse but it's basically used to point out for particular task which takes place anywhere.