The earth is covered with 71 % of water and oceans contain the most part of water (97 %) present on the earth. The glaciers and polar ice caps cover 2.4 % of water and rest of the water is found in rivers, ponds and below the ground of the earth.

Water is odorless, colourless and transparent liquid. It can dissolve most of the available substances, therefore, it is called universal solvent. Changing of water into water vapour and then again into water on the earth goes through a cycle which is called water cycle.

Look at the following picture of water cycle: 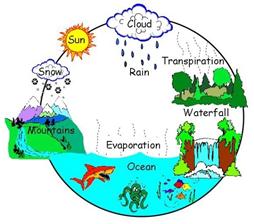 Water cycle is also called the hydrologic cycle. It is defined as the continuous formation of water by changing the forms of water. Forms of water changes in a water cycle. The water which is stored in the ocean, rivers, glaciers and any other medium evaporates by the solar energy and convert into clouds or water droplets for precipitation. Therefore, the balance of water on the earth remains unchanged due to each molecule of water comes on the earth and go in the atmosphere and again comes back. In this process, water goes through all three states of matter, like, solid in the form of ice, liquid in the form of water and gas in the form of water vapor.

Different Processes in the Water Cycle

Let's study about the processes, which keeps water cycle goes on continue.

Condensed water vapor falls on the earth in the form of rain, snow, fog drip, etc. is called precipitation.

Fresh water is required for every human being and for those living organism to survive on land. The taste of sea water is salty, therefore, cannot be used for drinking and agriculture purposes. Some part of water on the earth is present in the form of glaciers which is also the source of fresh water.

The different sources of water can be divided into two groups:

The water which is found in the different water bodies on the surface of the earth is known as the surface water.

The following are the sources of surface water:

Sea Water: Seas or oceans are the sources of water. The sea or ocean water is not used for drinking purpose, but these are the sources to form droplets of water in the atmosphere for precipitation. Therefore, huge amount of water is evaporated from the seas which causes the precipitations. Sea water contains sodium chloride which causes the salty taste of water. The density of the sea water is more as compare to the fresh water.

River and Lake Water: The flow of water from the melted glaciers of the mountains, form a path to travel towards the lower region, from the upper region and is called river.

River water is the fresh water; but it contains impurities. This is because it travels long distance from its origin. River water contains soluble and insoluble impurities which is filtered and treated for the drinking purpose. Some suspended particles like, bacteria, clay, organic matter in the river water make it muddy.

A large hollow water area on the earth's surface is known as Lake. Lake is the water body of still fresh water. There are various natural processes for the formation of Lakes. Lake gets the water from the rivers and rain.

Rain Water : Water on the earth evaporates and condensed in the atmosphere to form water droplets. These droplets of waterfall on the ground and is called rain water. Rain water is the purest form of natural water because it converts from the gas form of water into liquid form. The gases and dust particles in the atmosphere also fall with the water droplets on the ground. Rain water falls on the ground along with atmospheric gases like, carbon dioxide, nitrogen dioxide, ammonia, sulfur dioxide, etc.

Spring Water: Spring water flows from underground to the surface of the earth. It does not have suspended particles and impurities. Spring water contains lots of minerals like, soluble salts of Na, K, Fe, Ca, etc. which are dissolved in it. It also contains gases which makes it tasty for drinking.

Water is required for every living organism. Life is not possible without water.

The presence of unwanted materials in the water is called water pollution and unwanted material is called pollutants. There is less amount of potable water worldwide. But these sources of potable water get polluted by the human activities like, throwing of unwanted substances from the industry in rivers and flow of drainage in the river. Human and animal excreta in the open places are mixed with the rain water and flow into the nearby water sources. The harmful microorganisms in the waste of living organism cause the diseases like, jaundice, diarrhoea, etc.

Water pollution can be reduced by taking the preventive measures like, flow of treated sewage in the rivers, not throwing the dead bodies of animals in the rivers, etc. The throwing of chemicals from the industries in the river causes the harmful effect on the living organism which depend on the river for drinking and living. Dumping of chemicals not only affect the life of animal which depend on river for drinking, it also affects the aquatic life. Textile industries use the compounds of metals like, chromium, lead, cadmium, mercury, etc. These chemicals are the highly toxic and harmful for the lives. Excess use of fertilizers in land ultimately flows into the nearby water bodies and pollutes them.

Statement 1: Water is called the universal solvent because, it has capacity to dissolve most of the substances.

Statement 2: Water is called the universal solvent because, it has capacity to freeze at. zero degree Celsius.

(c) Both statements are true

(d) Both statements are false

Water is called the universal solvent because, it has capacity to dissolve most of the substances. Therefore, option (b) is correct and rest of the options is incorrect.

Which one of the following statements is true about the potable water?

(a) Potable water cannot be used for irrigation

(b) Potable water cannot be used for dissolving chemicals