The upper part of wind pipe has voice box which produces sound in the human body. Two vocal cords across, the voice box or larynx, leave a narrow slit between them for the passage of air. Sound is produced when lungs force air through the slit and the vocal cords vibrate.

Look at the following picture of voice box (Larynx) in the human body:

Echo is produced when sound waves reach the listener a few moments after the production of sound. The ear of human cannot listen an echo if the delay between the produced sound and reflected sound is less than \[\frac{1}{10}\] of one second. The echo effect also depends on the distance between the sound producing body and reflecting object. The distance between the sound producing body to the reflecting object must be more than 17.50 metres. Echo effect is used to listen the heart function of human body by a stethoscope. It is also used for analyzing the depth of the sea. Some materials do not allow the sound waves to reflect, therefore, they are called sound absorbers. For example porous materials like sandstone.

Look at the following picture to understand, how the echo effect is produced: 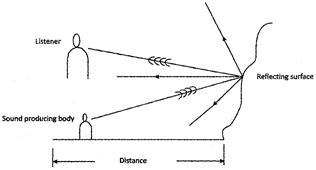 Middle ear has liquid for conducting the sound waves into the inner part of the ear. When sound waves enter into our ears, athin membrane which is called eardrum catch the sound waves through ear canal. Sound waves vibrate the eardrum and eardrum sends the vibration to its hammer (one of the three tiny bones in the ear). The vibration of hammer causes the anvil (a tiny bone touching the hammer) to vibrate. Vibration of anvil is passed on to the stirrup and then to the cochlea through liquid filled sack. Cochlea sends the signal to the brain.

Look at the following picture of human ear: 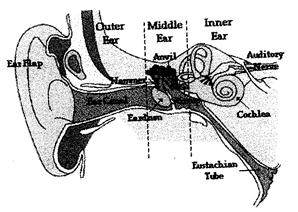 The speed of sound depends on the physical features of the medium. Which one of the following mediums allows the sound to travel with maximum speed?

Sound travels fast in dense medium. Therefore, option (D) is correct and rest of the options is incorrect.

Sound travels fast in dense medium. Therefore, option (D) is correct and rest of the options is incorrect.

Which one of the following parts of human ear sends the signal from the liquid filled sack to the brain?

Cochlea sends the signal to the brain. Therefore option (A) is correct and rest of the options is incorrect.

Bending of a beam of white light, when it enters from a medium into another medium, is called refraction of light.