10th Class Science Our Environment The Transformation of Energy

The Transformation of Energy

The Transformation of Energy

The transformation of energy in an ecosystem begin first with the input of energy from the Sun. Energy from the Sun is captured by the process of photosynthesis. Carbon dioxide is combined with hydrogen, which is derived from the splitting of water molecules to produce carbohydrates. Energy is stored in the high energy bonds of adenosine triphosphate, or ATP.

Because it is the first step in the production of energy for living things, it is called primary production. Herbivores obtain their energy by consuming plants or plant products, carnivores eat herbivores, and omnivores consumes both plants and animals. A simple food chain as shown in the figure given below, in which energy from the Sun, captured by plant photosynthesis, flows from trophic level to other trophic level via the food chain. A trophic level is composed of organisms that make a living in the same way, that is, they are all primary producers, primary consumers or secondary consumers. 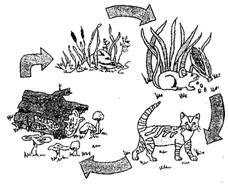 Dead tissue and waste products are produced at all levels. Scavengers, detritivores, and decomposers collectively account for the use of all such "waste" — consumers of carcasses and fallen leaves may be other animals, such as crows and beetles, but ultimately it is the microbes that finish the job of decomposition. Usually when we think of food chains we visualize green plants, herbivores, and so on. These are referred to as grazer food chains, because living plants are directly consumed. In many circumstances the principal energy input is not green plants but dead organic matter. These are called detritus food chains. Examples include the forest floor or a woodland stream in a forested area, a salt marsh, and most obviously, the ocean floor in very deep areas where all sunlight is extinguished 1000's of meters above.

All the living organism obtained its energy form the food they eat. The food transfer energy from one organism to the another. The sequence of living organism in a community, in which one organism consumes another organism to transfer food energy, is called food chain. The food chain tells us that the plants are the starting point of every food chain. There are number of food chains in our ecosystem. In our food chain grass are the producer which uses solar energy to prepare food for themselves and this grass is consumed by the consumers such as deers and other animals. 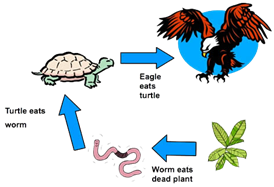 There are large number of food chains in a ecosystem and many food chains are interconnected by species, present in more than one food chain. Thus, the network of food chain is called food web. The food web has many intercrosses and linkage among the various species present in it. For example, below given is a food web: 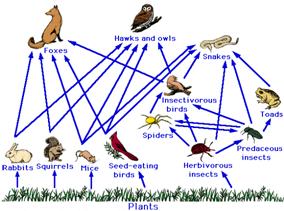 The trophic level of an organism is the position it occupies in a food chain. The word trophic is derives from the Greek word, which means food or feeding. A food chain represents a succession of organisms that eat other organisms and are, in turn, eaten themselves. Each steps in the food chain is called trophic level. Food chains start at trophic level 1 with primary producers such as plants, move to herbivores at level 2, predators at level 3 and typically finish with carnivores or apex predators at level 4 or 5. The path along the chain can form a one-way flow, or a food "web." 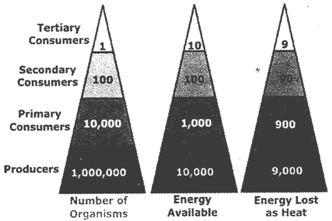 The three basic ways organisms get food are as producers, consumers and decomposers. 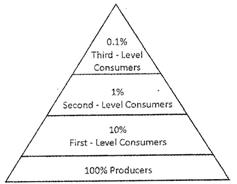 The increase in the concentration of harmful chemicals in the living organism like plants and animals as we move up in the trophic level is called biological magnification. These chemicals enter into our body through food chain. We use pesticides and insecticides in farming. These pesticides enter into the plant body through the soil. Pesticides are non bio degradable chemicals which gets accumulated in the body of animals and plants. These chemicals damages our health. Here is an example to show how biomagnifications works: A little fish eats plankton that has tiny amounts of mercury in it. That little fish eats a lot of plankton in its life and the mercury accumulates in its body. A bigger fish eats a lot of those little fish over its life, accumulating the mercury in each of those little fish into its body. If the mercury makes the little fish stay very small, the bigger fish has to eat more little fish to stay alive. More little fish, more mercury. 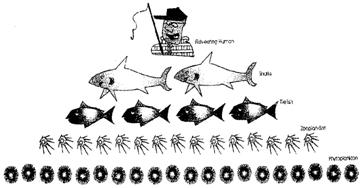