We use adverbs in daily life to show intensity of action or giving specific details. 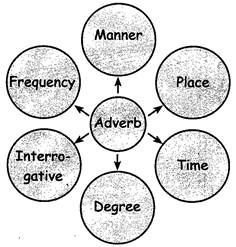 An adverb is a word that describes an action verb

An adverb can describe how an action happens. Example: Jason quickly read the book.

How did Jason read? Quickly. An adverb can describe when an action happens. Example: Emma left early.

When did Emma leave? Early. An adverb can describe where an action happens. Example: Lily and Ben played here.

Where did Lily and Ben play? Here.

(A) Adverbs of Manner: They describe how the actions are done. Example- Slowly, fast, loudly

(B) Adverbs of Place: They show where an action is or was done. Example- My friend is waiting outside.

(C) Adverbs of Time: The adverbs show when an action is or was done. Example- I meet him everyday. Come home early.

(D) Adverbs of Degree: They show how much or to what extent a thing is done. Examples- They often talk to me.

He rarely loses his temper.

(E) Adverbs of Frequency: These are used to show the number of times an action is or was done. Example: I saw her only once.

He has already been punished twice.

(F) Interrogative Adverbs: These adverbs are used for asking questions. Example: When do we meet ?

Why are you so sad ?

A Poem on Adverb

The ship was sailing smoothly

the crew was singing merrily,

then came the storm monstrously

everyone ran on the deck hurriedly

the captain said to everyone politely,

let us all face it gracefully

The storm went away

"we are safe", said the captain ecstatically.

We can form adverbs by adding 'LY' to adjectives. Example: Loud-Loudly; Bright-Brightly Sometimes we may have to change the spellings before we add- 'LY' we remove 'E' or 'Y'