This lesson -will help you to:

B The value of the place, or position, of a digit in a number or series is called place value. Each place has a value of 10 times the place to its right.

The idea of place value is at the heart of our number system.

The concept of place value is as follows:

For easier readability, commas are used to separate each group of three digits, which is called a period. When a number is written in this form, it is said to be in "standard form" Example: four hundred sixteen thousand, seven hundred thirty-one can be written as 416,731.

The role of place value in addition, subtraction and multiplication algorithms.

Misconcept:  Numeral 1 is a prime number

Concept: 1 is neither prime nor composite. It does not have any factors except the number itself.

Concept: This is not true, since the number 2 has only 2 factors, 1 and 2, and is also an even number.

Let’s us understand the concept of place value in multiplication, with the help of an example.

Example: Multiply the following numbers: 263 and 64

Put the 2 in one’s column and carry over 1 to the tens column. 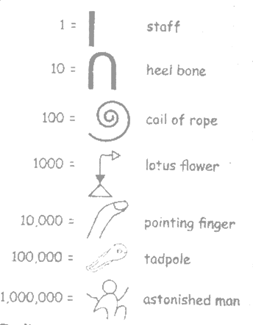 (carry over from step 1)

Put the 5 in tens column and carry over 2 to the hundreds column.

(carry over from step 2)

Put the 8 in tens column and carry over 1 to the hundreds column.

(carry over from step 1)

Put the 7 in hundreds column and carry over 3 to the thousands column.

(carry over from step 2)

STEP 3: Add result of Multiplier 1's and Multiplier 10's results and put the result in the Product columns.

To study about informal and standard division algorithm

Unlike addition, subtraction and multiplication, division is performed from left to right.

A factor is simply a number that is multiplied to get a product. Factoring a number means taking the number apart to find its factors — it's like multiplying in reverse.

Factors are either composite numbers or prime numbers.

Prime .number : A prime number has only two factors, one and itself, so it cannot be divided evenly by any other numbers. Here's a list of prime numbers up to 100.

These numbers cannot be factored any further.

Composite numbers: A composite number is any number that has more than two factors. These numbers can all be factored further. For example, 4 equals 2 times 2, 6 equal 3 times 2, 8 equals 4 times 2, and so forth.

Composite numbers up to 20

Example: Find the prime factors of 168.

To check the answer, multiply these factors and make sure they equal 168.

Greatest Common Factor: The greatest common factor, or GCF, is the greatest factor that divides two numbers. To find the GCF of two numbers:

The simple divisibility rules will help you to find factors of a number.

The number is divisible by:

How to find multiples of a given number?

Example: Multiple of 3 are 3

Some important points about multiples:

How to find LCM of the given numbers.

The LCM of the given numbers.

Factors which are common to at least two numbers: 2, 3, 5

Factors which are not common to at least two numbers: 3

VARIABLES: A variable is a symbol for a number we don't know yet. It is usually an alphabet.

If it is not a variable it is called a constant.