The human skeleton or skeletal system is made up of 206 bones. A baby has 300 bones in all But as it grows, some of the bones fuse together or join. Before we learn more about bones and the Joints and where they are joined together, let us take a look at the functions of the skeletal system.

The bones of our body act as a framework or give a shape to our body. Without bones, our body could be a shapeless mass, say like the body of a snail. It is the movements of the bones that helps us bend, run, walk and so on.

Twenty-two bones make up the skull. These are the hardest of all the bones in the body. Some of tee form the cranium, or the cover for the brain. All the bones of the   skull except the one forming the lower Jaw are fixed firmly, and cannot move. Only the bone of the lower jaw is capable of movement, which helps us to eat and speak.

Most of the bones of the skull are fixed. Only the lower jaw can move.

The spine also called the vertebral column or backbone, the spine consists of 33 small bones known as vertebrae (singular: vertebra). The vertebrae are hollow at the centre and are joined together form a tube, through which runs the spinal cord.

One of the functions of the vertebral column is to protect the spinal cord. The other functions are to hold the body up and help us bend forward, backward, sideways and twist from the waist.

Running through the centre of the chest is the breastbone or sternum. Joined to it are 10 pairs of strong, flexible bones called ribs. The ribs curve around and join the chest vertebrae at the back, to form a protective cover for the lungs and heart, called the ribcage. Another two pairs of ribs are joined only to the backbone. These are called floating ribs. The ribs are attached to the sternum in such a way as to allow the ribcage to expand when we inhale, or breathe in and contract when we exhale, or breathe out. 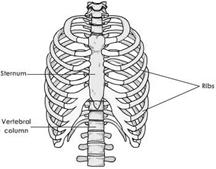 In shoulder bone each collar bone (clavicle) is attached to a shoulder blade (scapula) and to the breastbone. 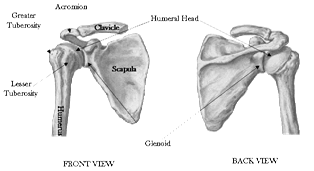 The Bones of the Arm and Hand 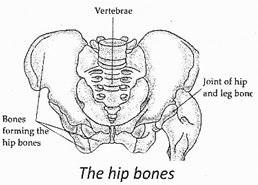 The Bones of the Leg

A place where two or more bones join is called a joint. Bones are joined by tough, flexible bands of elastic tissue called ligaments. A player of smooth, rubbery tissue called cartilage, covers the surface of a bone. This reduces friction between the surfaces when the bones move against each other.

Ball-and-Socket Joints: For example, the shoulder and hip joints allow movement in all directions.

Hinge Joints: For example, the elbow, knee and finger joints allow movement in one plane only.

Pivot Joints: For example, the neck Joint allows movement in upward-and downward direction, left and right and also to rotate it.