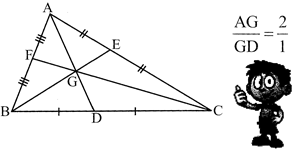 Identify triangle among following figures and also identify its six elements and vertices.

The figure (iv) is a triangle

Note:    A triangle cannot have more than one right angle.

A triangle cannot have more than one obtuse angle.

This is such an important property that it will be used right from class VII to graduation level and even higher (post -graduation level). Hence it is very important, commit to memory, and apply wherever required.

(a) The sum of any two sides of a triangle is greater than the third side.

(b) The difference of any two sides is less than the third side.

(a) An equilateral triangle, If all of its sides are equal.

(b) An isosceles triangle, if any two of its sides are equal.

(c) A scalene triangle, if all of its sides are of different lengths.

(a) The altitudes drawn on equal sides of an isosceles triangle are equal.

(b) The altitude bisects the base of an isosceles triangle.

(c) The altitudes of an equilateral triangle are equal.

(d) The centroid of an equilateral triangle coincides with its orthocenter.

Exercise for the students

You should practice each of these properties by drawing roughly appropriate Ale and drawing altitudes in them.

In center: Draw angle bisectors of a triangle as shown they meet at point 'I', called in centre.

Circumcentre: Draw perpendicular from midpoints D, E, F lying on sides AB, BC and CA respectively. Let them meet at 0, which is called circumcentre. This ensures that \[OA=OB=OE\] If we draw a circle with radius \[OA=OB=OC,\]then we get a circle touching vertices A, B and C of triangle. Hence, O is given the name -circum centre of \[\Delta ABC\] because it circumscribes \[\Delta ABC\].

In the right angled triangle