In this age of computers there is no such activity that cannot be achieved without computers. Computer has become an indispensable and multipurpose tool. We are breathing in the computer age and gradually computer has become such a desire necessity of life that it is difficult to imagine life without it. This book will help you to gain an understanding of the basic as well as advanced concepts of computers. It will cover foundational study of the computer hardware, software, operating systems. Internet Technology, DBMS (Database Management system) & computer Network & Its security, or more. 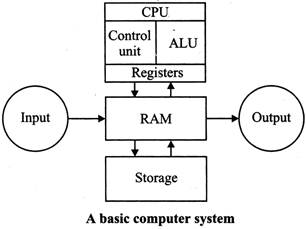 To know about the working of a computer, first need to understand various terms such as Data, Processing and Information. First of all, let’s start with three basic terms:-

The major characteristics of computers are the following:

Like all machines, a computer needs to be directed and controlled in order to perform a task successfully. Until such time as a program is prepared and stored in the computer's memory, the computer 'knows' absolutely nothing, not even how to accept or reject data. Even the most sophisticated computer, no matter how capable I it is, must be told what to do. Until the capabilities and the limitations of a computer are recognized, its usefulness cannot be thoroughly understood.

In the first place, it should be recognized that computers are capable of doing repetitive operations. A computer can perform similar operations thousands of times, without becoming bored, tired, or even careless. Secondly, computers can process information at extremely rapid rates. For example, modem computers cat solve certain classes of arithmetic problems millions of times faster than a skilled mathematician. Speeds for performing decision-making operations are comparable to those for arithmetic operations but input-output operations, however, involve mechanical motion and hence require more time. On a typical computer system, cards are read at an average speed of 1000 cards per minute and as many as 1000 lines can be printed at the same rate.

Thirdly, computers may be programmed to calculate answers to whatever level of accuracy is specified by the programmer. In spite of newspaper headlines such as 'Computer Fails', these machines are very accurate and reliable especially when the number of operations they can perform every second is considered. Because they are man-made machines, they sometimes malfunction or break down and have to be repaired. However, in most instances when the computer fails, it is due to human error and is not the fault of the computer at all. In the fourth place, general-purpose computers can be programmed to solve various types of problems because of their flexibility. One of the most important reasons why computers are so widely use today is that almost every big problem can be solved by solving a number of little problems-one after another.

Finally, a computer, unlike a human being, has no intuition. A person may suddenly find the answer to a problem without working out too many of the details, but a computer can only proceed as it has been programmed to.

HISTORY OF THE DEVLOPMENT OF COMPUTERS

In beginning, there were no computers. To add or subtract, man used his fingers and toes. Abacus is known to be the first mechanical calculating device. The main purpose of abacus was that additions and subtraction coud be performed quickly. Abacus was developed by the Egyptians in the 10th centuary B.C, but the final structure was given in the 12th centuary B.C, by the Chinese educationists. Abacus is made up of a frame in which rods are fitted across with rounds beads sliding on the rod.

Napier's bones in an Abacus invented by John Napier. Napier's used the bone rods for counting purpose where numbers were printed on them. With the help of these rods, one could do addition, subtraction, multiplication and division speedily.

In the year 1642, Blaise Pascal a French scientist invented an adding machine called Pascal's calculator, which represents the position of digit with the help of gears in it. Though these machines were early forerunners to computer engineering, the calculator failed to be a great commercial success.

Leibniz was successfully introduced as a calculator onto the market in the year 1646. It was designed further in 1673 but it took until 1694 to complete. The calculator could perform the basic mathematical operations such as add, subtract, multiply, and divide. Wheels were placed at right angles which could be displaced by a special stepping mechanism.

This analytical engine, the first fully-automatic calculating machine, was constructed by British computing pioneer Charles Babbage (1791-1871), who first conceived the idea of an advanced calculating machine to calculate and print mathematical tables in 1812. This Analytical Engine incorporated an arithmetic logic unit, control flow in the form of conditional branching and loops, and integrated memory, making it the first design for a general-purpose computer that could be described in modem terms as Turing-complete.

There are five Generation of Computer, these are:

The Third generation computers used the integrated circuits (1C). The first 1C was invented and used in 1961. The size of an IC is about 1/4 square inch. A single 1C chip may contain thousands of transistors. The computer became smaller in size, faster, more reliable and less expensive. The examples of third generation computers are IBM 370, IBM System/360, UNIVAC 1108 and UNIVAC AC 9000 etc.

An integrated circuit (IC), sometimes called a chip or microchip, is a semiconductor wafer on which thousands or millions of tiny resistors, capacitors, and transistors are fabricated.

The fourth generation computers started with the invention of Microprocessor. The Microprocessor contains thousands of ICs. The LSI (Large Scale Integration) circuit and VLSI (Very Large Scale Integration) circuit was designed. It greatly reduced the size of computer. The size of modem Microprocessors is usually one square inch. It can contain millions of electronic circuits. The examples of fourth generation computers are Apple Macintosh & IBM PC.

Scientists are working hard on the 5th generation computers with quite a few breakthroughs. It is based on the technique of Artificial Intelligence (AI). Computers can understand spoken words & imitate human reasoning. IBM Watson computer is one example that outsmarts Harvard University Students. 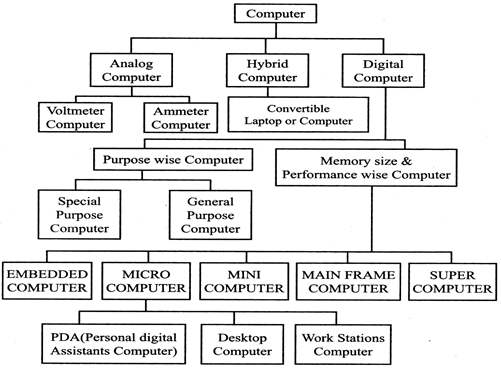 Computers can be classified according to the following types:

Digital computers are the computer systems that count things by manipulation of certain discontinuous numbers and letters through representation of binary digits (also called bits) in contrast to analog computers that measures the variations in quantities). In other words texts and graphics are treated numerically.

On the basis of purpose, computers are categorised as follows -

These computers are designed to work on different types of applications. In these types of computers the programs are not stored permanently rather programs are input at the time of their execution. Personal computers, including desktops, notebooks, smart phones and tablets, are all examples of general-purpose computers. Various tasks can be accomplished by using general purpose computers. For example writing and editing (word processing), manipulating different facts and figures in various databases, tracking manufacturing inventory, making scientific calculations, controlling organization's security system, electricity consumption, building temperature etc.

Special-Purpose computers are task specific computers and are designed to solve a particular problem. They are also known as dedicated computers, because these computers are dedicated to perform a single particular task repetitively. Examples of such computer systems include the traffic control system, they are also used in video games .navigational systems in an aircraft, weather forecasting, satellite launch tracking, oil exploration, and in automotive industries, keeping time in a digital watch, or Robot helicopter.

Computers can be classified by memory size and performance as follows -

A microcomputer is a computer that uses a microprocessor as its central processing unit. Microcomputers are physically smaller in size as compared to mainframe and minicomputers. Many microcomputers when equipped with a keyboard and screen for input and output respectively can be used as personal computers (in the generic sense) .Microcomputers are easier to use and also inexpensive as the memory used by them i.e. microprocessors and semiconductors have become cheaper in the last few years.

E.g.: The various microcomputers widely available are IBM pcs, APPLE mac etc. the small types of pcs like the palmtop and handheld are now becoming available.

It is a midsize computer. In the past few years the difference between large minicomputers and small mainframes has decreased significantly just like the distinction between small minicomputers and workstations. A minicomputer can support upto200 users at the same time.

Mainframe computers known as the "Big Iron" are computers that are used primarily by corporate and governmental organizations. Modem mainframe design is generally defined by the following features:

Supercomputer is a term used for one of the fastest computers that exist today. They are deployed for specialized applications that require processing of highly critical data and immense amounts of mathematical calculations.

Personal Computers are computers that are designed for an individual user. These computers are small and a relatively cheaper. In price, personal computers can range anywhere from a few hundred pounds to over five thousand pounds. Personal Computers use the microprocessor technology as they enable manufacturers to put an entire CPU onto one chip. They serve myriad purposes and can be put to use by various businesses for word processing, accounting, desktop publishing, and for running spreadsheet and database management applications. People across the globe use internet for playing games, surfing net and other online applications at their homes and personal use.

Personal computers can be classified on the basis of its size .There are two basic types of the traditional designs i.e the desktop models and tower models. There are several variations on these two basic types also.

This model of personal computer refers to a computer in which the power supply, motherboard, and other mass storage devices are stacked on top of each other in a cabinet.

Also called ultra-book. These are extremely popular because they are extremely lightweight and portable. Because of their small size, typically less than 6 pounds or lesser than that, they have become so popular. These flat-panel technologies can produce a lightweight and non-bulky display screen. The quality of notebook display screens also differs considerably. Modem notebook computers are very similar to personal computers in terms of computing power.

Laptop are now a days also called notebook computers .These are small and portable .You can make them sit on your lap and work on them.

These computers are portable enough to be carried in one's hand. They are extremely convenient for use but due to extremely small size of their keyboards and screens they have still not succeeded in to replacing notebook computers.

These computers as the name suggest fit in your palm. Due to extremely small size their use is limited to phone books and calendars.

Smart phones are cellular phones that function both as a phone and a small pc. They may use a pen or may have a small keyboard. They can be connected to the internet using win (wireless fidelity). Apple, Samsung, Sony are some manufacturers of smart phones.

Computers have their application or utility everywhere. Some of the prominent areas of computer applications are:

Computers have taken the education systems in the entire world to a different level altogether. Following are the uses of computers in education-

There are many uses computers in defense such as: