The mass (m) of a body of matter is quantitative measure of its inertia i.e., its resistance to a change in the state of rest or motion of the body, when a force is applied.

Inertia is the property of a mass which resists change from its states of rest or motion.

Volume (V) is defined as the amount of space occupied by a three-dimensional object as measured in cubic units.

The weight of an object is defined as the force of gravity on the object and may be calculated as the mass times the acceleration of gravity, w = mg. Since the weight is a force, its SI unit is the

For an object in free fall, so that gravity is the only force acting on it,

Then the expression for weight follows from Newton's second law. 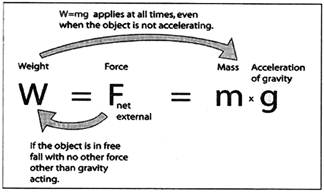 Ac gravity field in Newtons/kg at our location. We can view the weight as a measure of the mass in kg times the intensity of the gravity field, 9.8 Newton's/kg under standard conditions.

Density (p) is defined as the mass of a substance per unit volume.

Mass per unit volume is defined as density. So density at a point of a fluid is represented as

where m is the mass and v is the volume of the fluid. Density is a positive scalar quantity.

But for a hollow body or body with air gaps

Density of given liquid

Being a dimensionless/unitless quantity R.D. of a substance is same in SI and CGS system.

Thus specific gravity of a liquid is numerically equal to the relative density of that liquid and for calculation purposes they are used interchangeably.