Fundamental Rights are defined as Basic human freedoms, which every Indian citizen Bas to enjoy for a proper and harmonious development of personality. It contains six rights. Fundamentals Rights are justiciable and are protected by the judiciary. The Constitution seeks to strike a balance between individual freedom and social interests through the Fundamental Duties. To make fundamental right and duties of citizens of India safe and effective, there are certain guidelines for the governance of the country given in the Directive Principles of state policy. 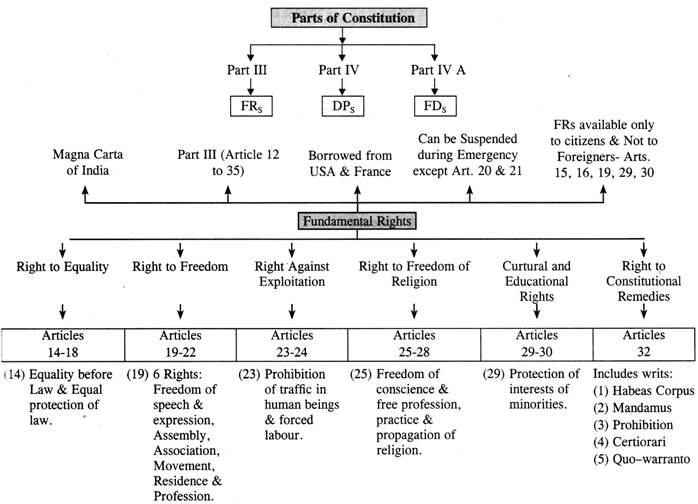 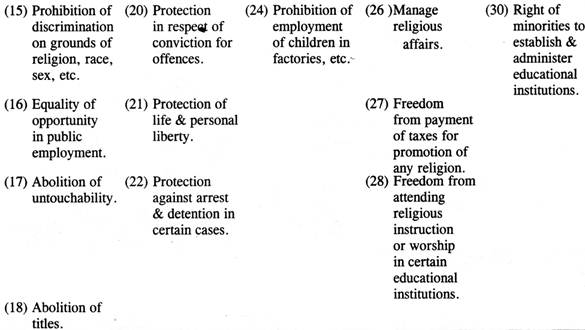 'Rule of Law' is the "Basic Feature" of the Constitution which cannot be destroyed even by constitutional amendment under Article 368.

Exception to the Rule of Law

ARTICLE 17 & 18: Abolition of Untouchability and Titles

Provides for 6 fundamental rights in the nature of freedoms. These are guaranteed to Indian citizens with reasonable restrictions.

ARTICLE 20: Protection in respect of conviction for offences

ARTICLE 21 and 22: Protection of Life and Personal Liberty

Article 22 grants protection to persons who are arrested or

No law providing for preventive detention shall authorize the detention of a person for a longer period than 3 months unless - an advisory board consisting of persons who are qualified to be appointed as judge of a High Court has reported before the expiration of the said period of 3 months that there is in its option sufficient cause for such detention.

ARTICLE 23 and 24: Right against Exploitation

ARTICLE 25 and 28: Right to Freedom of Religion

The traditional rule to apply for redressal of breach of fundamental rights. The person whose right has been breached can approach the court (locus standi).

The right to information has been granted to citizens under the Information Act passed by the Indian Parliament in 2005.

The Act entitles every citizen to have access to information

Controlled by public authorities of both the Union and the State governments. The main objective of this right is to make the government open, transparent, responsive and accountable to the people. According to this law people can seek any information from the government, which is duty bound to provide the requisite information within a specified period of 30 days. If the concerned authorities do not provide correct and timely information, complaint can be lodged with the Central Information Commission/State Information Commission. If the requested information is denied to a person, he/she must be informed of the reasons for refusal. It may further be noted that the law does not apply to Jammu and Kashmir, or security agencies like IB, RAW and BSE. The other areas which have been excluded from the jurisdiction of the law include cabinet papers, legal advice relating to decision making, information likely to breach the privileges of the Parliament and state legislatures, etc.

Fundamental rights are not absolute and have limitations

regarding their exercise. The limitations strike a balance between individual liberty and social need.

Article 358 provides that during national emergency, President under Article 352, fundamental freedoms guaranteed by Article 19 are suspended and cannot be revived during emergency. Things done during emergency

cannot be challenged even after it is over.

Article 359 empowers the President to suspend the Right to move a Court for the enforcement of rights conferred by Part III of the Constitution (except Article 20 & 21) during an emergency.

Under Article 358, rights conferred by article 19 are suspended. Suspension under article 359 can only be by an order of the President.

Can Fundamental Rights be Amended

Directives in other Parts of the Constitutions

Besides the directives in part IV, there are certain other Directives in the Constitution, also non-Justiciable. These include Article 350 A which calls upon the state to provide adequate facilities for instruction in mother tongue at primary school level to children from linguistic minority groups. Article 351 calls upon the Union to promote the spread and development of Hindi to enable it to become the medium of expression of all the parts of the composite culture of India. Article 335 supports the claims of the Scheduled Castes and Scheduled Tribes to appointments in government service, subject to the maintenance of efficiency of administration.

There is no doubt that both the Fundamental Rights and the Directive Principles of State Policy are important feature of the constitution. However, they differ from each other in certain points.

(i) The Fundamental Rights seek to protect the individual from state encroachment and thus they are enforceable; the Directive Principles are aimed at the promotion of the

General welfare of society and they are not enforceable.

(ii) The Fundamental Rights constitute limitations upon State action; The Directive Principles are positive instructions to the government to take steps to establish a just social, economic and political order.

Added to the Constitution by 42nd amendment, 1976.

Added on the recommendations of "Swaran Singh Committee."

Originally 10 duties, but now increased to 11.

Borrowed from the Constitution of undivided USSR.

(a) The Prevention of Insults to National Honour Act (1971) prevents disrespect to the Constitution of India, the

National Flag and the National Anthem.

(b) The Indian Penal Code declares the imputations and assertion prejudicial to national integration as punishable offences.

(d) The Representation of People Act (1951) has provided for the disqualification of members of the Parliament or a State Legislature for indulging in corrupt practice of soliciting votes on the ground of religion or promoting enmity between different sections of people on grounds of religion, caste, race and language, etc.