As \[OP<r,P\]is a point in the interior of the circle.

If \[OQ=r,Q\]is a point on the circumference of the circle and is said to belong to the circle.

As \[OR>r,R\]is a point in the exterior of the circle.

The line segment joining any two points on the circumference of a circle is called chord of the circle. In the figure \[\overline{PQ}\] and \[\overline{RS}\]are the chords.

Theorems and properties on chords

The perpendicular bisector of a chord of a circle passes through the centre of the circle.

Given: RS is a chord of a circle with centre O. N is the midpoint of chord PQ.

One and only one circle exists through three non – collinear points.

Given: P, Q and R are three non – collinear points as shown in the adjoining figure:

Two equal chords of a circle are equidistant from the centre of the circle.

The converse of the above theorem, is also true, i.e., two chords which are equidistant from the centre of a circle are equal in length.

Angles Subtended by Equal Chords at the centre

Angles Subtended by an Arc

Angles subtended by an arc at any point on the rest of the circle are equal.

The opposite angles of a cyclic quadrilateral are supplementary. 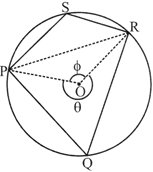 The exterior angle of a cyclic quadrilateral is equal to the interior opposite angle.

When a line and a circle are drawn in the same plane, we have the following cases.

(i) Then PQ is called secant of the circle.

(ii) Then AB is called the tangent of the circle at P.

(a) At any point on a circle, only one tangent can be drawn.

(b) From any given external point, two tangents can be drawn to a circle.

(c) From any point inside a circle, no tangent can be drawn to the circle.

The tangent at any point on a circle is perpendicular to the radius through the point of contact.

Statement of the Theorem:

Two tangents drawn to a circle from an external point are equal in length.

Statement of the Theorem

If two chords of a circle intersect each other, then the products of the lengths of their segments are equal.

Alternate Segment and its Angles

If a line touches the circle at a point and if a chord is drawn from the point of contact, then the angles formed between the chord and the tangent are equal to the angles in the alternate segments.

A line is drawn through the end point of a chord of a circle such that the angle formed between the line and the chord is equal to the angle subtended by the chord in the alternate segment. Then, the line is tangent to the circle at the point.

Common tangent to Two circle in a plane

2.  The number of common tangents to two circles touching internally is one. 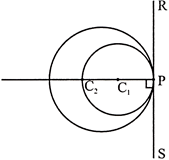 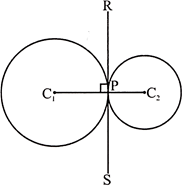 Case 3: The direct common tangents to two circles of equal radii are parallel to each other.