The Rise of Nationalism in Europe 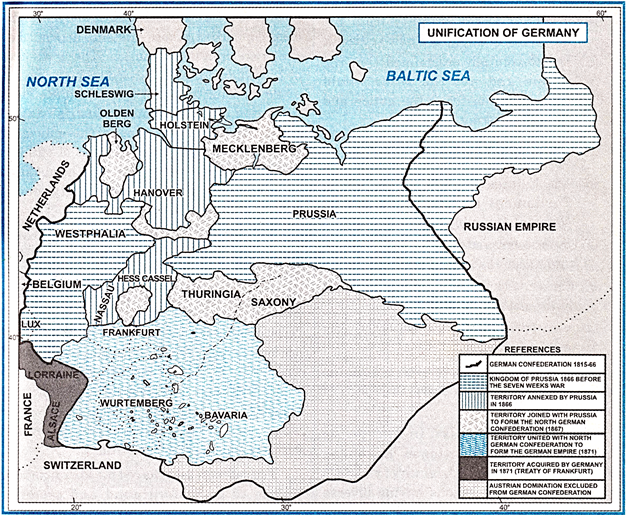 Till the middle of 19th century Europe was divided into many monarchical absolutist states with diverse people speaking different languages and belonging to different racial and ethnic groups. There was no collective identity among them.

A common allegiance to the ruler was the only binding force.

Nineteenth century, however, saw the emergence of nationalism as a new force which brought about sweeping changes in political and mental world of Europe. This resulted in the cowering of nation-states in place of multinational dynastic empires. The concept of a modern state with a defined territory, with ruler and citizens sharing common bonds and history, became popular. This was possible only through a process of action struggle, and efforts of leaders and common people.

The French Revolution and the idea of a Nation.

The first clear expression of nationalism was the French Revolution in 1789 when the commoners revolted against the absolute monarch Louis XVI.

The Revolution led to the

(a)        Transfer of Sovereignty from the monarchy to a body of French citizens,

(b)        The Revolution proclaimed that the people and not the ruler would henceforth constitute the nation and shape its destiny,

(c)         It guaranteed equal rights under a constitution,

(d)        The Estates General or the French Parliament was renamed as the National Assembly,

(e)         Uniform law and standardized weights and measures were introduced,

With the outbreak of revolutionary war the French armies began to carry the ideas of nationalism abroad.

Making of nationalism in Europe. As    has already been mentioned European countries were ruled in 19th century by various dynastic rulers over regions having diverse population, e.g., Habsburg dynasty ruled over regions of Austria, Hungary, Italian provinces of Lombardy and Venetia, German speaking Sudetenland and Polish speaking Galicia. In Hungry common people spoke Magyar. Except for allegiance to a common ruler there was hardly any political unity. Similarly Germany, Italy and Switzerland were divided into various kingdoms.

Socially and politically the landed class was the dominant class. Elite class spoke French and were often connected by marriage. The majority of population was made up of peasantry. However the western and central parts of Europe were undergoing social and economic changes. Rapid growth of industrial production and brisk trade led to growth of towns and cities. It also resulted in the emergence of a commerical class and a working class population, whose existence depended on the production in the market. The new forces of 18th and 19th centuries led to the formation of new social groups; a new middle class consisting of professionals, industrialists and businessmen. It was among this educated liberal middle class that the ideas of national unity took shape, which aimed at the abolition of aristocratic privileges and unity among people on rational basis.

Though the French Revolution released the spirit of nationalism and liberalism conservative powers of Europe made a bid to challenge these forces. In 1815, Britain, Russia Prussia and Austria-who collectively defeated Napoleon-met in a Congress at Vienna to draw up a settlement for Europe. The main aim of the Treaty of Vienna signed by them was to undo liberalism and restore monarchies to bring a conservative order in Europe. New laws were passed for censorship of press and suppressing all liberal activities.

Fear of repression forced the liberal minded people to go underground and organize revolutionary activities to overthrow conservative regime. By the end of 19th century republics were set up in France and many other countries. All German and Italian states were unified to form independent states of Germany and Italy.

Nationalism aligned with imperialism led Europe to disaster in 1914 in the form of World War I.

However anti-imperialist movements that developed in colonies opposed imperial domination. These movements were nationalistic in nature. The idea of collective unity and the idea that the societies should be organised into nation-states came to be accepted as natural and universal.