They have hair on the body.

Mammals are warm blooded hence they can regulate temperatures.

They have sweat glands to cool the body by taking heat from the body.

Mammals give birth to young ones.

They have mammary gland to feed the young ones.

Mammals have four legs to walk on.

They have more developed brain than other.

Mammals have flippers and fins (If aquatic) instead of legs for swimming.

Look at the following diagram of types of Mammals 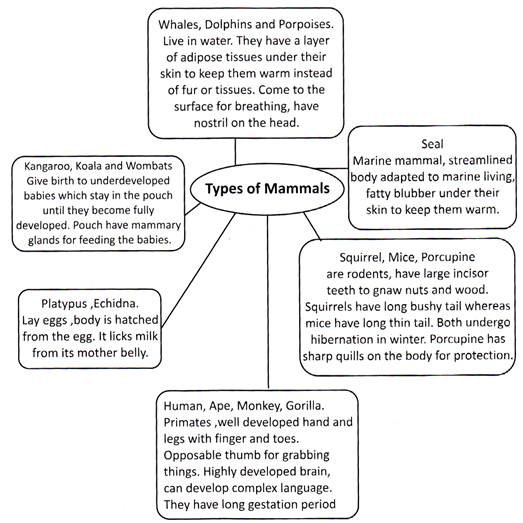 Squirrels, mice and polar bear etc. go underground or in burrows to avoid extreme cold condition in winter. This is an adaptation to weather.

Stripes on the Body

Tiger, Zebra, and Cheetah have stripes on their body to help them hide among grasses and leaves so that they can easily kill their prey (Adaptation for catching prey and self protection).

Stripes on the body for self-protection

Sharp Spines on the Body

Porcupine have sharp spines all over its body to protect themselves from their enemies (adaptation for self protection).

Spines on the body to themselves from enemy

Monkeys, Chimpanzee live on trees and have prehensile tail and opposable thumb to hold branches of the tree (Adaptation to aerial habit).

Opposable thumb to hold the branches of the tree

Deer, goat, cow, squirrels, rats, etc. are herbivorous, which eat only plants and plants' product. Tiger, lion, cheetah etc are carnivorous which feed on other animals like deer, goat etc. Human being is omnivorous as it eats both plants and animals.

Both male and female are mainly needed sexual mode of reproduction Young ones are similar in structure and behavior to their parents. Parents take care of their babies till it is matured enough to take care of itself. Cheetah cubs fully rely on their mother for food and protection.

Mother talking of her child

Whales migrate from warm tropical waters far north or south for the brief summer where food is in excess.

Giraffe is a mammal and all mammals including humans have same number of bones on neck. How many bones are present in its neck?

Explanation: A Giraffe has seven bones in its neck just like other mammal but the giraffe's neck bones are much longer. Therefore, option (A) is correct and rest of the options is incorrect.

Which of the following figure best represents the relation between whales, dolphin and porpoises?

Dolphin and porpoises both are small whales. Hence they are represented under Whale. Therefore, option (C) is correct and rest of the options is incorrect.

By the age of six a child knows more than 2,500 different words.

Hector's dolphin is sometimes called the Mickey Mouse dolphin, because its dorsal fin is shaped like this famous cartoon character's ears.

Wild horse no longer lives wild. It is rare and kept mainly in parks and nature reserves.

The arctic tern travels more than any other bird.

The barn owl lives almost everywhere except icy Antarctica. No other bird is so widespread.

The pattern of stripes on a tiger's fur is unique. No two tigers have quite the same pattern.

Tigers are the biggest of the cats.

The giraffes tongue can stretch out up to 46 cm.

Poison arrow frog is one of the most poisonous of all animals.