For example, a globe occupies more space than a ruler does. The globe has more volume than the ruler.

They are solids, liquids, and gases.

Misconcept:  Condensation is when air turns into a liquid.

Concept:  Condensation is water vapour in the air that cools enough to become a liquid.

Misconcept:  Condensation on the outside of a container is water that seeped (or sweated) through the walls of the container.

Concept:  Condensation of water vapour happens when the water vapour in air comes in contact with a cool surface. 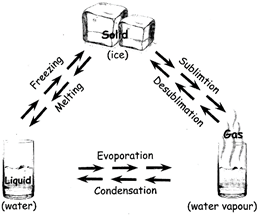 When a solid turns into a liquid it is called melting. There is a temperature at which this happens called the melting point. As the energy in the molecules increases from a rise in temperature, the molecules start moving faster. Soon they have enough energy to break free of their rigid structure and start moving around more easily. The matter becomes a liquid. The melting point for water is 0 degree C (32 degrees F). When the opposite happens and a liquid turns into a solid, it is called freezing.

When a liquid becomes a gas it is called boiling or vaporization. Again, at a certain temperature called the boiling point, the molecules will gain enough energy to break free and become a gas. The boiling point for water is 100 degrees C. When the opposite occurs and a gas becomes a liquid, it is called condensation.