English papers took nine months to reach India in the 18th century. How fast do you receive information today? What are the means by which we come to know about what is happening in another corner of the world? Why is it important to receive news and information on time? The answer to all these questions lies in knowing about the media. In this chapter, we will come to know about media in democracy.

'Media' is the plural form of the Latin word medium, meaning 'an intervening agency, or instrument'. We use the media to communicate. We write letters to our family members and Friends, call up people on the telephone, send documents and photographs through email, fax, etc., to share information or communicate with each other. These agencies or instruments like the letter, telephone, fax and email enable us to communicate with one or few persons and are means of personal media. But today, we are not frogs in the well. What happens in one comer of the world affects us all in a big way. The media has made such information accessible to us. Radio, television, newspapers, magazines and the Internet reach and influence a large number of people. These sources are called the mass media.

How and when did we begin to communicate? What are the different means of communication? When did mass media come to India? These could be the questions in your mind.

Communication developed gradually. Humans started to speak and communicate with words about 60,000 years ago. They began to write nearly 5,000 years ago. The printing press was invented some 600 years ago and people began to publish various thoughts and findings. Books which educated the masses came into being. Radio was invented only 110 years back followed by the television 30 years later. The radio and television were also sources of entertainment. When the Internet came about 45 years ago, it revolutionised the world of communication. With a click of a button one could travel all over the world. Children could explore and learn about the world around them.

In India, print media came into existence in 1780 with the introduction of a newspaper-The Bengal Gazette. The radio was developed in 1924 and the television in 1959. The quality and range of media has also evolved with the upgrading of technology.

Today we find 24-hour news channels, music Videos, nature documentaries, and reality shows about everything. There are also movies available on demand from cable providers or television and videos available online for streaming or downloading. We have access to media in taxis and buses, in classrooms and doctors' offices, and even in aeroplanes.

The Internet has become a medium that allows everyone the ability to express their opinions, for example, through blogging and social networking.

Today, the media has a great influence on people in India. There are over 62,000 newspapers and periodicals, over 300 radio stations, more than 500 television channels and more than 3.2 million Internet connections. And the number is growing every day.

Television,   radio,   cinema,   newspapers, magazines, and Internet-based websites are the means of communication. Many of these media are controlled by corporations which earn revenue from advertising, subscriptions and sale of copyrighted material. Advertising remains the main source of revenue for television and print media.

Smartphones and 3G/4G network in India, have also resulted in billions of mobile application (apps) downloads during 2015. These app-downloads have led to increase in the revenue.

Q. what are the other three organs of the government in India?

A sound public opinion is the backbone of democracy. The media forms public opinion by giving live coverage of events and updating news in news channels on television and in newspapers. Channels like NDTV, Aaj Tak, Times Now and ABP News not only give news but also evoke response and awareness among people about their rights and duties. When the Indo-US nuclear deal was approved by the US Senate, people openly gave their opinions, both for and against the deal, certifying its pros and cons. The media helped the people to form opinions and aired them in talk shows like we, the People and debate shows such as the Big Fight.

Digital India programme was launched in July, 2015. It aims to make India digitally empowered. Various schemes regarding this plan include Digital Locker, e-health, e-education, national scholarship portal, e-sign, etc. Such services help to reduce paperwork and save time. This project has been planned to be completed by 2019.

According to the initiative by "Bharat Broadband Network Limited (BBNL)" high speed internet connection has been made available in almost 250,000 villages and other areas of the country.

Such shows have been significant in airing public opinion and enlightening the common people. Newspapers and magazines air public opinion through the editorial column and letters to the editor.

However, whatever information the media provides is not balanced. It may happen that the same event is covered in two different media by taking into consideration two different sides of the story.

Take two excerpts from two different dailies covering the same event, but differing in their perspective. Do a comparative analysis to justify that for media to be effective and unbiased, it ought to write a balanced report, which it can write only when it is independent.

Development means change for the better. The mass media plays an important role in communicating this change and uphold social causes. Using the mass media, people's attitudes and habits can be changed. Because I am a Girl blog plans campaigns to fight gender inequality and promotes girls' rights. Storyboards of TV serials, films, animation films, radio jingles, slogans, ads, cartoons, campaigns, posters and banners have criticised female infanticide and foeticide. They have brought about some attitudinal shift in society's thoughts about women's equality and empowerment.

Take up a social issue that concerns you as a student. Discuss it in the class. Consider all the opinions and write an article. You can send it to a newspaper or upload it on a blog.

Corruption is the use of public office for personal gain. Hence, it is a wrong practice and an injustice to the nation. Media plays a key role to contain corruption.

The media also brings the public to the street to fight for a cause and bring justice. Read the given case study in which the media was instrumental in pushing the government to amend the law.

Media has a powerful influence on our mind and thoughts. The media presents reports regarding a specific event, which is the main source of information. If you want to understand what happened, then you can simply watch some news and media updates regarding that event.

If you take a very close look at television shows and news reports, you will notice that some of these outlets have a message that can be etched within the mind. In previous years, it was irresponsible for reports and news anchors to incorporate their own thoughts and ideas regarding a certain situation. But today anchors and news presenters give their own opinions

A STRUGGLE TO BECOME A LAW

In December 2012, a heinous crime was committed in Delhi in which a juvenile was involved. At that time, there was no law in place to try juveniles as adults, in case they commit any heinous crimes. When the juvenile was tried as per juvenile laws and given a lighter punishment even for committing such a grave crime, a huge public outcry erupted. Following intense media and public pressure, the Juvenile Justice (Care and Protection of Children) Bill was passed in parliament in December, 2015 which provides for lowering the age for trial from 18 years. The Juvenile Justice Act, allows children aged 16 to 18 years and in conflict with law to be tried as adults in cases of heinous offences.

Which influence how one perceives a specific news item. Some news reports are also such as how the press TV wants the public to perceive a specific person. For example, a show may present all of the possibilities of a politician as a suspect of bribery, but fail to present the other side of the story.

Mass media also has a very positive effect on people. It evokes feelings of love, national pride and patriotism, especially in situations involving national difficulties or catastrophes. Based on this, media definitely has a great responsibility in shaping the perception and opinions of different people.

Q. Do you think the role of media would be the same in an undemocratic country?

The Indian media has been Tree and Independent' throughout most of its history. The period of Emergency (1975-1977) was the only brief period when India's media faced government disapproval. During this time, restrictions were imposed on free speech and the Press Council of India was abolished. But after it?s re-establish- ment in 1977, people's interest and involvement in the affairs of their states and nation increased significantly. The media became more involved, and began to check and voice public opinion on the performance of the government.

The Information and Broadcasting Ministry ensures that media houses work independently and responsibly. The ministry plays a significant role in helping the people to access all types of information. It spreads knowledge and provides entertainment to all sectors of society. It strikes a careful balance between public interest and government interest.

The Ministry of Information and Broadcasting also exercises its right of censorship on media. A news item, song or any unethical/biased/ untruthful message or thing transmitted by media can be banned in public interest.

The Ministry of Information and Broadcasting forms and administers rules, regulations and laws related to information, broadcasting, the press and films. The Press Council of India has listed some ethical codes:

?      Accuracy: The information provided by the media should be accurate. Media persons need to verify the facts before making them public. The approach should be unbiased, else it can harm the interests of individuals, institutions and the country.

?      Right to privacy: A journalist should respect the right of a person to have privacy and should not write anything about the private life of a person.

?      Discourage violence: Media should not write anything that would motivate people to indulge in violence or crime.

?      No obscenity: Media should not write anything vulgar or obscene.

?      No communal writing: Our Constitution believes in secularism, which means respect for all faiths and religions. The media should not write about or broadcast issues that can promote communal problems.

Q. Can you think of an instance where you feel that the media has behaved irresponsibly?

According to the New Delhi-based Indian Newspaper Society, India has 62,000 newspapers, with 90% of them in local languages.

Jaipur-based Rajasthan Patrika publishing house has a Pan-Indian circulation of two million copies a day. Till a few years ago, Mohanlal Parwani used a horse to cover the mountains along the hilly terrain till Sawai Madhopur (a town in Rajasthan), to deliver the Rajasthan Patrika, a top-selling Hindi newspaper, to the doorsteps of 150 households. As he delivered the papers, he scribbled notes on village matters on a pad to take back to the paper's editors. Even today, he delivers the newspapers but now on a moped, given to him by Rajasthan Patrika for doubling up as a journalist and a delivery boy.

Local papers are a hit with readers because of their connection to local issues. They cover local news and cover national and international news in only that much detail as would concern local people. Like their urban newspapers, local papers also rely on advertising to earn revenue. Locally focused ads help rural newspapers. Television also plays a major role as local media. 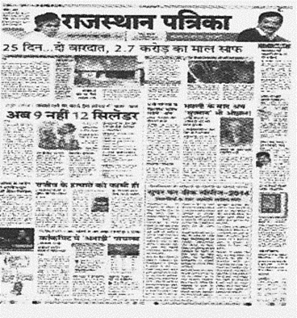