Computer organization is the way in which the components are built in computers whereas Computer architecture is the science of integrating those components to achieve a level of functionality and performance this chapter we shall study a high level view of computer architecture that may be concerned with how the central processing unit (CPU) acts and how it uses computer memory.

Computer Architecture is the field of study of selecting and interconnecting hardware components to create computers that satisfy functional performance and cost goals. It refers to those attributes of the computer system that are visible to a programmer and have a direct effect on the execution of a program.

The features and functionality of a bus are as follows

The instruction cycle represents the sequence of events that takes place as an instruction is read from memory and executed. 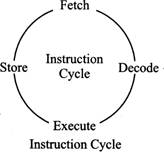 A simple instruction cycle consists of the following steps

Computer understand instructions only in terms of Os and 1s, which is called the machine language. A computer program is a set of instruction that describe the steps to be performed for carrying out a computational task- The processor must have two inputs; instructions and data.

The instruction tell the processor what actions are needed to be performed on the data. An instruction is divided into two parts; operation (op-code) and operand.

The op-code represents action that the processor mast execute and the operand defines the parameters of the action and depends on the operation.

The hierarchical arrangement of storage in current computer architectures is called the memory hierarchy. It is designed to take advantage of memory locality in computer programs. Each level of the hierarchy is of higher speed and lower latency, and is of smaller size, than lower levels. 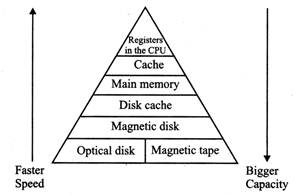 Computer memory is the storage space in computer where data is to be processed and instructions required for processing are stored. The memory is divided into large number of small parts. Each part is called cell. Each location or cell has a unique address, which varies from zero to memory size minus one.

A CPU contains a number of register to store data temporarily during the execution of a program. The number differ from processor. Registers are classified as follows:

GENERAL PURPOSE REGISTERS; these registers store data and intermediate results during the execution of a program.

(ii) STRACK POINTER (SP): The stack is a sequence of memory location defined by the user. It is used to save the contents of a register if it is required during the execution of a program. The stack pointer hold the address of the last occupied memory location of the stack.

(iii) INTRUCTION REGISTER: It holds an instruction until it is decoded. Some computers have two type of instruction register, and so they can fetch and save the next instruction while the execution of the previous instruction is going on.

Memory-memory is made up of large number of cells.

(v) MEMORY DATA ADDRESS: The memory data register (MDR) is the register of a computer’s control unit that contains the data to be stored in the computer storage (e.g. RAM), or the data after a fetch from the computer storage. It acts like a buffer and holds anything that is copied from the memory ready for the processor to use it.

Memory is primarily of two types:

Buffer: It is a temporary physical storage used to hold data during execution of process from one place to another.

Primary memory holds only those data and instructions on which computer is currently working. It has limited capacity and data gets lost when power is switched off. It is generally made up of semiconductor device. These memories are not as fast as registers. The data and instructions required to be processed earlier reside in main memory. It is divided into two subcategories: RAM and ROM.

There are two types of Random Access Memory or RAM, each has its own advantages and disadvantages compared to the other.

Each type has unique characteristics, but all types of ROM memory have two things in common they are:-

CPU is much faster than memory. The problem comes when the CPU issues a memory request, it will not get the data is need for many CPU cycles. The slower the memory the cycles the CPU will have to wait. This problem can be overcome by introducing a small and very fast memory near the CPU. The small, fast memory is called. Cache memory is a very high speed semiconductor memory, which can speed up CPU. It acts as a buffer between the CPU and main memory.

Flash memory is an example of quite a recent type of storage technology known as solid state devices. This type of portable storage has become very popular because of its low price and high storage capacity compared to its rival, e.g. floppy disk.

Solid state devices are regarded as being robust reliable because they have no moving parts with the data stored in semiconductor chips. This technology already exists in the form of flash memory used to store the Basic Input/output System (BIOS) of a motherboard.

Unlike ROM, flase memory can be read from and written to and unlike RAM does not require power to retain its data. Although these devices typically cannot hold as much data as hard disks, CD-ROM and DVDs, the storage capacity is continually increasing.

This separation allows an extremely large virtual memory to be provided for programmers when only a smaller physical memory is available. Following are the situations, when entire program is not required to be the data or computation. Certain option and features of a program may be used rarely. Many tables are assigned a fixed amount of address space even though only a small amount of the table is actually used.

The size of the main memory is very small if large data need to be stored in it. Further, the main memory is volatile in nature i.e. the contents are lost when power supply is stopped. To overcome these another memory is used in a computer system called secondary memory or the auxiliary memory. This is large as well as non- volatile in nature. This type of memory is also known as external memory or non-volatile. It is slower than main memory. These are used for storing Data/Information permanently.

CPU directly does not access these memories, instead they are accessed via input-output routines. Contents of secondary memories are first transferred to main memory and then CPU can access it for example disk CD-ROM, DVD, etc.

Following are the different types of computer Storage Devices/Secondary memories -

A magnetic disk consists of a collection of platters (generally 1 to 12), rotating on a spindle at 3,600 to 15,000 revolutions per minute (RPM). These platters are metal or glass disks covered with magnetic recording material on both sides, so 10 platters have 20 recording surfaces. The disk surface is divided into concentric circles, called tracks. Each track in turn is divided into sectors. A sector is the smallest unit that can be read or written.

(i) DVD-R DVD-R is called as Digital Versatile Disc-Recordable. DVD-R has features similar to CD- R, where the drive is capable or recording once to a disc and then read many times after it has been created. DVD-R is an approved standard by DVD Forum and the drives are capable of recording to DVD-R discs. These discs are also known as DVD-5 and DVD -10. DVD-R discs are compatible with most standalone DVD players and computer DVD-ROM drives.

(ii) DVD-RW (DVD-R/W): These are called as Digital Versatile Disc-Read/Write. DVD-RW is an approved standard by DVD Forum. It is based on a technology that enables a user to read and write to a DVD-RW or DVD-R disc several times. DVD-RW discs are compatible with most stand-alone DVD players and computer DVD-ROM drives.

A tape cassette is magnetically thin coated piece that is wrapped with plastic around wheels. These are capable of storing data. Tape is far cheaper than other storage mediums but is much slower than the jump drives, memory sticks etc. Tapes are not much in use these days for faster and more reliable solution like disk drives, hard drives, and flash drives.

DVDs and can hold up to 25GB on a single-layer disc and 50GB on a dual-layer disc. This extra capacity combined with the use of advanced video and audio codecs will offer consumers an unprecedented HD experience.

Secondary Memory Device and their storage Method and capacity. 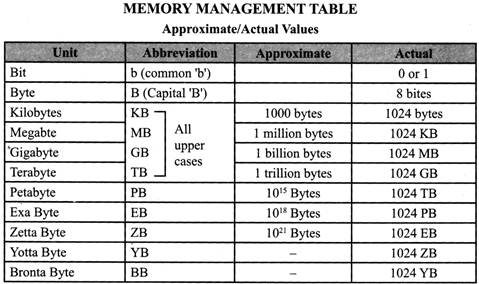 The term ‘bit’ is short for Binary digit.