(a) System Software   (b) Application Software 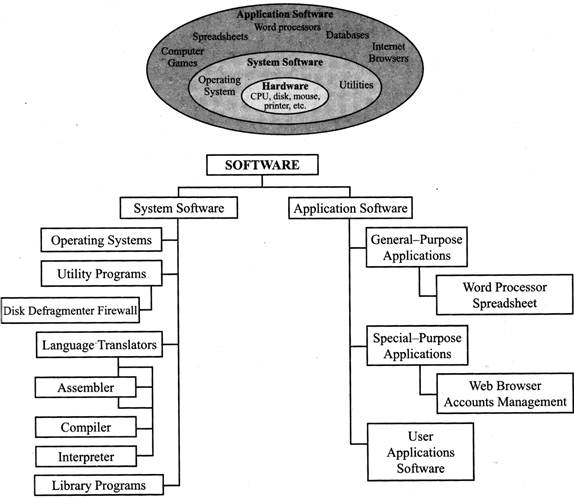 System software is the software which manages and controls the hardware components and allows interaction between the hardware and the other different types of software. The computer's operating system is a type of system software. Device drivers are also a part of this category.

Operating systems can be found on almost any device that contains a computer—from cellular phones and video game consoles to supercomputers and web servers. For example: UNIX, MS-DOS, WINDOWS, 98/2000/xp/7.

Functions of an operating system -

The basic functions of an operating system are:

File Allocation table (FAT): It uses the file allocation table which records, which clusters are used and unused and where files are located within the clusters.

NTFS: It is a file system introduced by Microsoft and it has a number of advantages over the previous file system, named FAT32 (File Allocation Table).NTFS also allows permissions (such as read, write, and execute) to be set for individual directories and files.

The operating systems are of mainly following types:

SOME OTHER IMPORTANT OPERATING SYSTEM

(iii) Linux: It is a UNDC-based operating system that is available for free on the World Wide Web. Many companies, such as Red Hat, Corel and Mandrake, create easy-to-use versions of Linux that you can purchase. Red Hat Linux is a popular version that comes with the GNOME desktop environment. GNOME displays pictures on the screen to help you perform tasks.

Linux is an open source code operating system. It can be copied, modified and redistributed with few restrictions. This flexibility is one of the reasons why Linux is so popular among users.

An embedded system is a computer that is part of a different kind of machine. Examples include computers in cars, traffic lights, digital televisions, ATMs, airplane controls, point of sale (POS) terminals, digital cameras, GPS navigation systems, elevators, digital media receivers and smart meters, among many other possibilities.

In contrast to an operating system for a general-purpose computer, an embedded operating system is typically quite limited in terms of function - depending on the device in question, the system may only run a single application. However, that single application is crucial to the device's operation, so an embedded OS must be reliable and able to run with constraints on memory, size and processing power.

Thousands of connected embedded devices have been built on Windows Embedded platforms, from portable ultrasound machines to GPS devices and from ATMs to devices that power large construction machinery.

Operating systems for mobile devices generally aren't as fully featured as those made for desktop or laptop computers, and they aren't able to run all of the same software. However, you can still do a lot of things with them, like watch movies, browse the Web, manage your calendar, and play games.

GUI is a program interface that takes advantage of the computer's graphics capabilities to make the program easier to use.

Basic Components of a GUI

Graphical user interfaces, such as Microsoft Windows and the one used by the Apple Macintosh, feature the following basic components:

Short for Microsoft Disk operating system, MS-DOS is a non-graphical command line operating system derived from 86-DOS that was created for IBM compatible computers. MS-DOS originally written by Tim Paterson and introduced by Microsoft in August 1981 and was last updated in 1994 when MS-DOS 6.22 was released. MS-DOS allows the user to navigate, open, and otherwise manipulate files on their computer from a command line instead of a GUI like Window.

MS DOS based on character user interface. In this communication between a computer and the user can be done by using characters. In dos, one has to key in the commands on the prompt. Prompt is a place where commands are issued. It may look like C :\> or C:\windows\>.

Utility software is software that helps to maintain and protect the computer system. It does not directly interface with the hardware. Examples include anti-virus software, firewalls, disk defragmenters and so on. System utilities are the core software functions that allow you to manage your computer in ways that you would find it inconceivable to be without.

Disk Cleanup is a function that comes with all versions of Windows Operating Systems. Disk Cleanup allows for you to scan your entire hard drive to search for extra room by deleting any unnecessary files such as temporary files from the Internet and cookies that are downloaded when you visit webpages. You can find Disk Cleanup in Windows XP by going to the Start menu\[\to \]All Programs\[\to \]Accessories\[\to \]System Tools\[\to \]Disk Cleanup.

Defragmentation is the process of locating the noncontiguous fragments of data into which a computer file may be divided as it is stored on a hard disk, and rearranging the fragments and restoring them into fewer fragments or into the whole file.

Disk compression is a type of function that allows for a program to search your hard drive and compress files, particularly old or unused files. It also serves to free up space, which is the main function of disk compression software. ,

It is used to scan computer for viruses and prevent the computer system files from being corrupt.

(Also known as 'apps') are designed to achieve a complete task or a set of tasks. Application software consists of the programs for performing varied tasks particular to the machine's utilization. There are various examples of application software that include MS Word, MS Excel, a console game, database systems, desktop publishing systems, program development software, a library management system etc.

Following is a brief definition of different examples of software’s available in the market and the differences between them.

There are various types of application software:

A videoconference is a meeting between two or more geographically separated people who use a network or the internet to transmit audio and video data.

A programming language is a set of commands, instructions, and other syntax use to create a software program. Languages that programmers use to write code are called "high-level languages." This code can be compiled into a "low-level language," which is recognized directly by the computer hardware.

(b) High-Level Language: Earlier languages that were developed during the development of computers required knowledge of the internal workings of the computer, hence attempts were made to ease the .programming where the knowledge on the the internal workings of the computer was not required. High-level programming languages allowed the specification of writing a program closer to those used by human beings. With the advent of high level languages programming became far easier, less error- prone and also removed the programmer from having to know the details of the internal structure of a particular computer. Fortran II was one of the first high level language introduced in about 1958.

Types of Error. Errors are either syntactic or semantic:

Syntax errors are errors in the program text.

Semantic errors are mistakes concerning the meaning of a program construct.

Many high level languages were developed since Fortran II (and many have also disappeared!), among the most widely used have been:

1GL or first-generation language was (and still is) the machine language generation. It refers to the level of instructions and data that is fed to the processor of a computer, (which in conventional computers is a string of Os and 1 s).

4GLs arethe programmer-friendly generation of programming. They are easier to write and hence improve the programming efficiency by using words and phrases close to the English language, with appropriate, use of icons, graphical interfaces and symbolical representations. 4GLs have also increased the number of professionals to be able to develop skills set in software development. 4GL and 5GL represent the leaps or the "generations" in the evolution of programming languages.

In general, in any number system there is an ordered set of symbols known as digits with rules defined for performing arithmetic operations like addition, subtraction, multiplication and division. A collection of these digits makes a number which in general has two parts-integer and fractional.

The digits in a number are placed side by side and each position in the number is assigned a weight or index.

Table below gives the details of commonly used number systems.

The number system with base (or radix) two is known as the binary number system. Only two symbols are used to represent numbers in this system and these are 0 and 1, these are known as bits. It is also known as base 2 system. It is a positional system that is every position is assigned a specific weight left - most bit is known as Most Significant Bit (MSB) and the right- most bit is known as the Least Significant Bit (LSB). Any number of Os can be added to the left of the number without changing the value of the number. A group of four bits is known as nibble and a group of eight bits is known as a byte. Table shows binary numbers and their equivalent decimal numbers.

It consists often digits from 0 to 9. These digits can be used to represent any numeric value. It is also known as Base 10 System.

It is one of the popular number system. It consists of 8 digits from 0 to 7. It is also known as Base 8 system.

Solution: The equivalent decimal number is,

Example: Express the 25.5 decimal number in the binary form.

Read down to up

This can be achieved by dividing the given decimal number repeatedly by 8, until a quotient of O is obtained.

On reading the remainders from bottom to top, the decimal (444)10(674)8. Now, fractional conversion

It can be explained through the following example: To convert (377) g into binary, replace each significant digit by its 3-bit binary equivalent.

It can be explained through an example. To convert (1D5) into binary, replace each significant digit by its 4-bit binary equivalent.

Kernel: The nucleus of an operating system. It is the closest part to the machine level and may activate the hardware directly or interface to another software layer that hardware. The kernel orchestrates the entire operation of the computer by slicing time for each system function and each application as well as managing all the computer’s resources. It typically resides in memory at all times.

Shell: The outer layer of a program that provides the user interface, or way of commanding the computer. The term originally referred to the software that processed the commands typed into the UNIX operating system. For example, the Bourne shell was the original command line processor, and C shell and Korn shell were developed later. In DOS, the default shell was COMMAND.COM

Thread: thread of execution is the smallest sequence of programmed instructions that can be managed independently by a scheduler (typically as part of an operating system). The implementation of threads and processes differs from one operating system to another, but in most cases, a thread is a component of a process. Multiple threads can exist within the same process and share resources such as memory, while different processes do not share these resources.

Deadlock: A condition that occurs when two processes are each waiting for the other to complete before proceeding. The result is that both processes hang. Deadlocks occur most commonly in multitasking and client/server environments. Ideally, the programs that are deadlocked, or the operating system, should resolve the deadlock, but this doesn’t always happen.

Multiprocessing: Multiprocessing is the use of two or more central processing unit (CPUs) within a single computer system. The term also refers to the ability of a system to support more than one processor and/or the ability to allocate tasks between them.