The respiration, which takes place in presence of oxygen is called aerobic respiration. It takes place in mitochondria. The product of this reaction is ATP. Inside mitochondria, when an inorganic phosphate group gets attached to compound called ADP, a molecule of ATP is formed. There it forms 38 molecules of ATP which is the unit for energy in the cell. 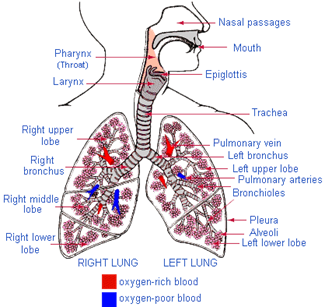 Air enters into our body through nostril. This air is filtered by fine hairs that is present in the inner lining of nostril. From there air passes through the wind pipe into lungs via trachea.

The trachea consists of rings of cartilage muscles, which prevents it from collapsing when we inhale the air. The trachea is further divided into two parts before entering into two lungs called bronchi. The bronchi when enters into the lungs, it gets further subdivided into smaller capillaries called bronchioles, which finally terminates in balloon like structure called alveoli.

The alveoli helps in the exchange of gases between lungs and blood vessels.

The spherical surface of alveoli increases the surface for the exchange of gases.

The blood brings carbon dioxide from the rest of the body and release it into lungs and takes up oxygen from lungs and carries it back to the body.