(1) Sucker : This is a sub aerial branch that arises from the main stem. Initially it grows horizontally below the soil surface and later grows obliquely upward. They are shorter and stouter than the runners. e.g., Mentha arvensis (mint vern. Podina) and Chrysanthemum.

(2) Stem tuber : Stem tuber is the tuberous tip of an underground branch. It occurs beneath the soil at any depth. The axillary branches (stolons) that are produced near the soil surface grow into the soil and their tip become swollen due to accumulation of starch and proteins e.g., Solanum tuberosum (potato). In potato, the stem nature is evident by the presence of ‘eyes’ on its brownish corky surface. Each eye is a pit like structure and represents the node. Axillary bud is situated in the pit of the eye. The stem tubers are differentiated from the tuberous roots by the presence of vegetatively propagating eyes.

(3) Rhizome : The rhizome is a thickened, underground dorsiventral stem that grows horizontally at particular depth within the soil. The rhizome is brown in colour. It can be distinguished from the modified root by the presence of nodes, internodes, terminal bud, axillary bud and scale leaves. The terminal bud develops aerial shoot that bears inflorescence. Adventitious roots develop on the ventral surface of the rhizome. The rhizomes are perennial and vegetatively propagating structures. It is of following types :

(i) Rootstock : They are upright or oblique with their tips reaching the soil surface. e.g., Alocasia indica and Banana.

(4) Corm : The corm is an underground modification of main stem. It grows vertically at particularly depth in the soil. The corm stores food materials and becomes tuberous. It is non green in colour and conical, cylindrical or flattened in shape. The corm bears scale leaves at each node. In the axils of these scale leaves axillary buds arise which grow into daughter corms. The terminal bud of the corm is large. 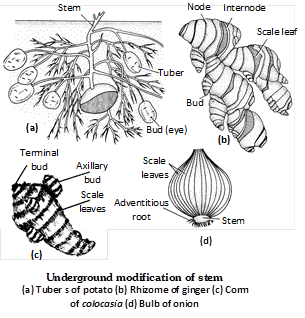 It grows into aerial shoot and bears leaves and flowers. Adventitious roots normally develop from the base or all over the body of the corm. With the help of some special adventitious roots called the contractile roots or pull roots, the corm remains constantly at a particular depth. The corm propagates vegetatively by daughter corms. e.g., Amorphophallus, Colocasia and Crocus (Saffron).

(5) Bulb : A bulb is a specialized underground stem which bears roots on it’s lower side and rosette of fleshy leaf bases or fleshy scales on the upper side. In a bulb, the stem is reduced and becomes discoid. On the lower side of the disc adventitious roots develop in clusters. The upper side of the disc shows compactly arranged scale leaves so as to form an underground bulb. The leaf bases or scales become fleshy due to accumulation of food (carbohydrates) and water. The terminal bud grows into inflorescence or aerial shoot (scape), while some of the axillary buds develop into daughter bulbs. Bulbs are of two types, tunicated bulb and scaly bulb.

(ii) Scaly or Imbricated bulb : In scaly bulb, the fleshy scale leaves are arranged loosely overlapping one another. Such bulbs are not covered by any tunics, hence called naked bulbs or scaly bulbs. e.g., Lilium bulbifera (Lily).

(2) Stem thorns : The axillary buds of some plants become arrested and get modified into stiff, sharp and pointed structures, called thorns. They are deep seated structures having vascular connections with stem. Besides reducing transpiration, they protect the plant from browsing animals. e.g., Citrus, Duranta, Bougainvillea, Pomegranate, Flacourtia, Aegle marmelos etc.

(3) Phylloclades : The phylloclade is special modified photosynthetic stem present mostly in xerophytes. It is green, flattened or cylindrical structure which has distinct nodes and internodes. Xerophytes show many adaptations to check the rate of transpiration. Reduction of leaf size, early leaf fall, formation of scale leaves, spines, thorns, thick cuticle, presence of fewer stomata are some of the xerophytic characters. In such cases, the stems become flattened to carryout photosynthesis. These modified stems are called phylloclades. Usually the phylloclades retain water in the form of mucilage. e.g., Opuntia, Casuarina, Cocoloba and Ruscus.

(4) Cladodes : These are modifications of stem and branches of limited growth. It has one internode only. Each cladode is green, flat or cylindrical, leaf like structure which performs photosynthesis. In Asparagus, the leaves are reduced to curved spines. In Ruscus aculeatus, the leaf like cladode are borne in the axils of scale leaves.

(5) Thalamus : Thalamus of a flower is a modified stem apex. The other floral parts (sepals, petals, stamens and carpels) are born on the thalamus. It may be convex (Ranunculus), concave (Lathyrus) or flask shaped (Rosa).