It is an unbranched filamentous green alga of stagnant fresh waters which forms floating masses (supported by bubbles of oxygen) called pond scum. A sheath of muscilage occurs on the outside. It gives a silky touch. Hence Spirogyra is also called water silk or mermaid's tresses.

The thallus is an unbranched and uniseriate filament where cells are arranged in a single row. In some species hold fast is present (e.g., S. fluviatilis). The cells are elongated and cylindrical. The cell wall is two layered the outer is of pectic substance and the inner of cellulose. The outer part (pectin) dissolves in water to form a muscilaginous sheath.

Due to this reason Spirogyra filament's are slippery. Transverse or septum can be plane, colligate (with H-shaped piece), replicate (ring like ingrowths) and unduliseptate (undulate). The protoplast is differentiated into plasma membrane, thin layer of cytoplasm, single nucleus, one (e.g. S.sahni and S. venkataramanni) or many (16 in S.rectispora) ribbon (spiral) shaped chloroplasts (wavy margin) with pyrenoids and a large central vacuole. Nucleus occurs inside the central vacuole where it is suspended by means of cytoplasmic strands. 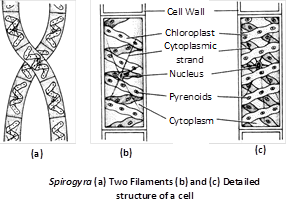 (1) Vegetative reproduction : It takes place by fragmentation of filament. Later on, each segment gives rise to new plant.

Azygospores or Parthenospores : If there is sudden change in the environment, the gametes fail to fuse and each functions as parthenospore.

The conjugation is of two types :

(1) Scalariform conjugation : This is the most common and advanced type of conjugation. It involves two filaments of Spirogyra and takes place between two recently formed cells. The cells of one filament show the formation of papilla towards the other filament.

It stimulates the formation of similar papilla in cells lying opposite to them. The two papillae fuse by enzymatic dissolution of the wall thus forming a conjugation canal. 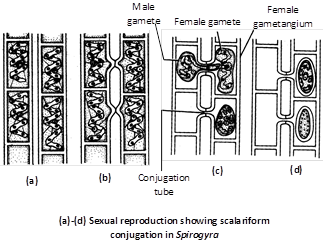 The conjugation tube between the two filaments looks like a ladder, through which gamete from one of the gametangia passes through to fuse with the passive gamete of another filament. The gametes are formed singly and both active and passive gametes are considered male and female gametes respectively. The fusion of both kinds of gametes with each other results into formation of zygospore.

(2) Lateral conjugation : It takes place between two nearest cells of the same filament (homothallic). Both male and female gametes are found in same filament. It is of two types.

(i) Indirect lateral conjugation : Two outgrowths appear on both sides of a transverse septum of two adjacent cells which later on form a conjugation tube. Of the two cells, one behaves as male gametangium from which gamete passes through the tube into female gametangium. By fusion, zygospore is formed. Thus in each second cell of a filament zygospore is formed. It is commonly seen in S. affinis and S. tenuissima. 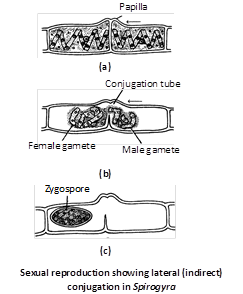 (ii) Direct lateral conjugation : In this type of conjugation, the male gamete after passing through an aperture in the transverse septum of adjoining gametangium enters the female gametangium and fuses to form a zygospore. The two gametes, though morphologically alike but differ in their behaviour. Hence this type of sexual reproduction corresponds physiologically anisogamy. It is commonly seen in S. jogensis.

Germination of zygospores : The zygospores on the arrival of favourable conditions germinate. The nucleus undergoes meiosis to form four haploid nuclei (tetra nucleate). Of these three nuclei degenerate and one functions.

The exo and mesospores rupture and the endospore protudes out in the form of germling. The new cell undergoes transverse division continuously to form a new filament. Thus in the life cycle of Spirogyra, there is no flagellate phase.

Life cycle in Spirogyra is haplontic as dominant phase in life cycle is haploid (n) and diploid phase is represented by only zygospore and it undergose R.D. or meiosis (zygotic meiosis).

It is a green filamentous algae found in slow running streams. The common species U. zonata occurs in cold water whereas       U. flacca is marine. U. implexa occurs in esturies (where river meats the sea) as lithophytes.

An unbranched filament, consisting of numerous cylindrical or rectangular cells joined end to end. The filaments remain attached to some substratum by means of rhizoidal cell, i.e., showing distinction in base and apex. The basal cell is elongated and colourless known as holdfast while the uppermost cell is rounded. Cell wall consists of two layers. Inner layer is made up of cellulose and outer layer is mostly made up of protopectin which is insoluble in water.

Due to presence of protopectin, Ulothrix filaments appear as wet threads.  In the centre of the cell is a nucleus and a girdle or ring shaped (U. zonata) or collar shaped chloroplast. One (U. rorida) or more pyrenoids are present in the chloroplast. A vacuole is present, surrounding it is a thin layer of cytoplasm (primordial utricle).

The Ulothrix reproduces vegetatively, asexually as well as sexually.

(1) Vegetative reproduction : It takes place by fragmentation. In this process a filament divides into small parts. These smaller fragments grow and give rise to new filaments of Ulothrix.

Zoospore formation : In favourable conditions, each cell produces zoospores except holdfast. Cytoplasm collects in the centre and divides into 2,4,8,16 or sometimes 32 segments. Each segment develops into biflagellate or quadriflagellate zoospores. Each zoospore is uninucleate, pear-shaped with thin cell membrane (zoospores not having cell wall). The zoospores are of 3 types :

Palmella stage : It is produced in water deficiency or presence of toxic chemicals. A number of small green naked cells are formed in mucilage sheath. These cells can grow and divide. On the approach of favourable condition each cell now change into a quadriflagellate zoospore. Zoospore develop into new plants.

(3) Sexual reporduction : It occurs at the end of growing season. Ulothrix is heterothallic. Sexual reproduction is of isogamous type. The gametes are motile and biflagellate. Except holdfast each cell of the filament can give rise to 64 to 128 gametes.

These gametes are smaller than zoospores. On dehiscence of gametangium, the gametes come out in a bag like structure and float on water.

When two gametes of (+) and (–) strain come together, they fuse and a quadriflagellate zygospore is formed which after floating for sometime on water, rests on the bottom of the pond. At this time, its four flagella disintegrate and a wall is formed surrounding it from all sides. After taking a rest for long period it divides meiotically and gives rise to 4-16 aplanospores or zoospores. These come out of the sac and give rise to a new plant of Ulothrix.