(Here 'O' is the starting point for ray OA)

VII. Complete angle: An angle whose measure is exactly equal to \[360{}^\circ \]is called a complete angle.

In the figure given, \[\angle AOD\] and \[\angle BOC\] are a pair of vertically opposite angles because they have common vertex at O and also OB, OA; OC, OD are two pairs of opposite rays.

Similarly, we find that \[\angle BOD\] and \[\angle AOC\] is another pair of vertically opposite angles.

II. Complementary angles: Two angles are said to be complementary if the sum of their measures is equal to \[90{}^\circ .\] 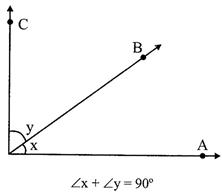 III. Supplementary angles: Two angles are said to be supplementary if the sum of their measures is equal to \[180{}^\circ .\]

In the figure given, the \[\angle BAC\] and \[\angle DAC\] form a linear pair of angles because the non-common arms AB and AD of the two angles are the opposite rays, with the same vertex A.

1. A linear pair is always supplementary.

In the above figure 't' is a transversal to the lines a and b.

In the figure given below, lines a and b are cut by the transversal ?t?. The eight angles marked 1 to 8 are shown as follows:

Note:    (i) The F-Shape stands for Corresponding angles.

(a) Corresponding angels are equal.

(b) Alternate interior angle are equal.

(c) Interior angles on the same side of the transversal are supplementary.