Food is the most important and basic thing for life. Carbohydrates, proteins, fats, vitamins and minerals are the components of food. These components are necessary for all living beings. All plants and animals require food for their growth and to get energy. The process of utilization of food by an animal to obtain energy for growth and development is known as nutrition, Plants make their food themselves but animals cannot. Hence, animals depend directly or indirectly on the plant.

MODE OF NUTRITION IN PLANTS 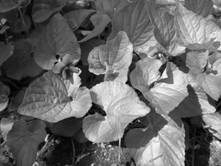 The word Heterotrophic is the combination of two words i.e. Hetero + Trophos.

Heterotrophic plants can be further divided into parasites, saprophytes and symbiotic plants.

The process of making of food by green plants in the presence of sunlight and chlorophyll is known as photosynthesis. Photosynthesis is the combination of two words- Photo + Synthesis. 'Photo' means light and 'Synthesis' means to make.

Leaves have several tiny pores like structure on its lower surface. This is called stomata through which leaves absorb carbon dioxide from air. Water is transported to the leaves through hair like pipelines from the roots. These pipelines are present throughout the plant, i.e. from roots to branches and leaves. These pipe-lines are known as Xylem.

Xylem is a type of tissues. Chlorophyll, a green pigment, is found in green leaves. Chlorophyll absorbs sunlight and gives energy. Chlorophyll absorbs sunlight, carbon dioxide and water and converts them to carbohydrate and oxygen. Carbohydrate is used as food and oxygen is emitted out to atmosphere. This whole process of making food by plants is called photosynthesis. The reaction takes place in the process of photosynthesis can be written as:

Around 2000 different types of plants are used by humans to make food.

Carbohydrate which is produced in the process of photosynthesis is ultimately converted into starch and stored into leaves. From leaves it is transported to the parts of plants. Starch is a type of carbohydrate. The oxygen so produced is released into atmosphere through the stomata. Leaves are known as the kitchen or food factories of the plants because photosynthesis takes place in leaves. Leaves look green because of the presence of chlorophyll. 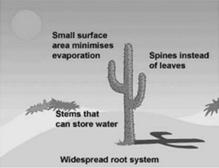 Sunlight is necessary for photosynthesis. Thus sun is the ultimate source of energy for all living organism.

Pine trees and other conifers have evolved to grow in a triangle shape because of photosynthesis. The trees shape exposes most of its needles to the sum, especially the ones near the top of the tree.

Following are necessary conditions for photosynthesis to be taken place:

The by-products of photosynthesis are oxygen and water, which are released through the stomata during daytime. The food that has been made is sent to the other parts of the plant through the veins. 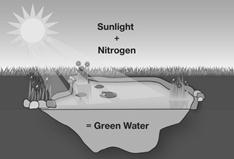 Green patches in ponds or near the stagnant water can be seen easily. These green patches are living organism called algae. Algae are plants. Often algae grow near the shallow waterlogged areas such as near tube- wells, taps, etc. One may slip over it. Algae look green because of presence of Chlorophyll. Algae prepare their own food by the process of photosynthesis.

Synthesis of Plant Food Other Than Carbohydrate

Plants need proteins and fats besides the carbohydrate. Proteins are nitrogenous substances which contain nitrogen. Although nitrogen is present in abundance in atmosphere, but plant cannot absorb atmospheric nitrogen. Plant gets nitrogen from soil. Certain types of bacteria called Rrhizobium, are present in soil. They convert gaseous nitrogen into usable form and release it into the soil. Plants absorb these soluble forms of nitrogen along with water and other minerals through their roots. Sometimes farmers add nitrogenous fertilizer to their field to fulfill the need of nitrogen. In this way plants gets fulfillment of nitrogen along with other nutrients. After the fulfillment of all nutrients plants synthesize proteins and fats.

Mistletoe is a partial parasite. Its scientific name is Phoradendron which means “thief a tree” in Greek. Its roots penetrate into the host tree to pull out nutrients and water

Some plants do not have the chlorophyll. Hence, they cannot synthesize their food by themselves. Such plants are known as non green plants. They depend on other organisms for food. Such plants use the heterotrophic mode of nutrition. 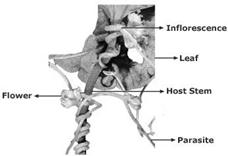 Cuscuta (Dodder) - Portion of Parasite Attached to the Stem of Host Cuscuta is a vine like plant with yellowish stem. It twines around big trees, like banyan tree. Cuscuta gets nutrition from the tree on which it lives. The tree upon which it climbs and lives is called the host. Here, banyan is the host and cuscuta is the parasite.

Orobanche ramose- The young seedling of santalum grows independently upto one year of age. After mis, fewroots develop haustoria, which make contact with roots of neighbouring trees. Some plants are total parasite while some are partial parasite. A total parasite fully depends on other plants for their nutrition. For example - cuscuta.

Rafflesia- it is also a total parasite growing on the roots of host plant. It lacks chlorophyll and its stem is thread like penetrating the roots of host plant and sucks the food from there. Rafflesia bears the biggest flower in the world. A single flower measures about 50-100 cm and weighs nearly 10 kg. It has smell of rotten meat. 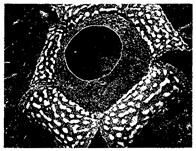 Partial parasite is a parasite that receives a part of its nutrients from host. For example; Viscum, a common mistletoe plant bears green leaves. It synthesizes its own food, but receives water and mineral from host plant. It sucks the liquid from the stem of the host plant with the help ofhaustoria. Visum does not have normal roots. Viscum: Plant Attached to Host Stem Cut Open to Show Haustoria Sandalwood- this is also a interesting parasite. It commonly grows in jungles ofKamataka, Tamil nadu and Kerala. These are rootless plants growing on roots of host plants.

Some plants eat insects. Such plants are called insectivorous plants. They trap and digest the insects. Pitcher plant is the example of an insectivorous plant. In pitcher plant the leaf is modified to form a pitcher like structure. The bright colour of the pitcher makes it very attractive to insects. Inside the pitcher; there are several hair-like structures. These hairs direct the trapped insects downwards. When an insect sits on the pitcher of the plant, the lid closes and the insects get trapped inside the pitcher. The insect is then digested by the enzymes secreted by the cells of the plants.

Cause of eating of insects by plants: The soil of marshy land is deficient in nitrogen. Plants living in marshy areas do not get nitrogen from the soil. Their nitrogen need is fulfilled by sucking the juice of insects. Venus flytrap, Utricularia, Drosera and Rafflesia are the other examples of insectivorous plants. 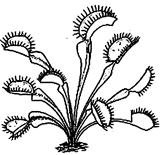 Holophytic nutrition in plants- plants do not eat food. Green plants make their own food. Heterotrophic plants absorb food with the help of their roots, haustoria or body surface. This type of intake of food is known as Holophytic nutrition [holo means whole, phyte means plant]. Holozoic nutrition in animals- animals eat readymade food from different sources. Most animals eat through their mouth. Some ingest food by other means. This kind of intake of food is called is called Holozoic nutrition rholo means whole, zoic means animals

Fungi are the main decomposers of wood. This is of great importance because without fungal decay our forests would become huge woodpiles.

Saprotrophs secrete digestive juice over the decaying materials and absorb nutrients from them. This is called Saprotrophic Mode of Nutrition. Such plants are called saprotrophs.

Symbiosis is the combination of two Greek words 'Sym' means 'with' and'biosis' means 'living', which means living together. In symbiosis ormutualism two different types of organisms live and work together fortheir mutual benefit from each other. They share shelter and nutrients,e.g. Lichens. Lichens are composite organisms composed of fungus andalga. Fungus is a saprophyte and alga is an autotroph. The Fungussupplies water and minerals to the cells of the alga while the alga suppliesfood; prepared by photosynthesis.

A lichen is a plant .in which algae and fungi live in a symbiotic association.

Nutrition- Refers to the entire process of taking in food and drinking by living organisms and using it for the purpose of growth and metabolic activities.

Autotrophs- Organisms which make their own food.

Heterotrophs- Organisms which obtain their food from other sources.

Parasite- Organism that lives for its food on other living plants or animals.

Saprophyte- A plant organism that lives for its food on dead organic matter.

Symbiotic- Two organisms that live together for mutual benefit.

Carnivorous plants- Those plants that derive some or most of the nutrition's by trapping and consuming insects and other small animals. 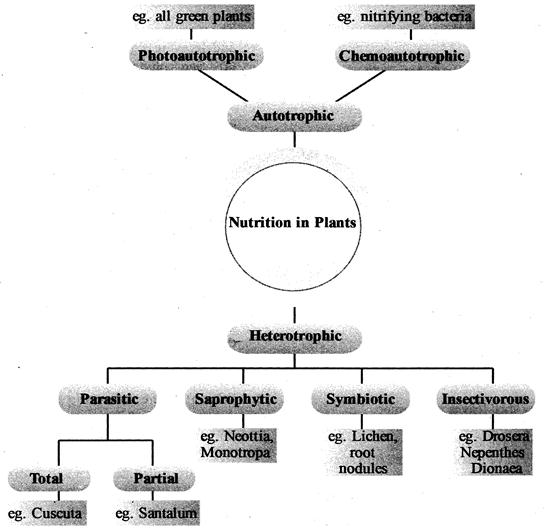