All living beings need food to carry out various life processes. Food gives living beings the material to build and maintain their body.

Nutrition is the process by which an organism obtains its food and utilize them. The nutrition can be categorised mainly into two type's namely autotrophic and heterotrophic nutrition.

Saprophytes are the non-green plants that feed on dead and decaying organic matters derived from plants and animals. These organisms break down the organic matters by secreting digestive juices into it. For example, mushrooms and toadstool, etc.

Some plants obtain a part of their food from insects. For example pitcher plants trap the insects in their modified leaf, kill them and digest them to obtain nutrients. In fact insectivorous plants grow in the soil which is not very rich in nutrients. So they get essential nutrients by eating insects.

Animals cannot make their own food because they do not have green pigment named chlorophyll. Animals depend on plants or other animals for their food.

Ingestion: Intake of food inside the body is called ingestion.

Digestion: Breaking down of large food molecules to smaller one is called digestion.

Absorption: The digested food is absorbed into blood stream through intestinal wall. This process is known as absorption.

Egestion: The process of removing undigested food out of body is called egestion.

Amoeba is a unicellular organism living in pond water. Amoeba has finger like projections called pseudopodia. Pseudopodia are false feet which is used by amoeba for catching and engulfing tiny food particles. The food is stored and digested into food vacuoles. The digested food is absorbed into cytoplasm and utilized for the metabolic procedures. The undigested food is expelled out of the body by rupturing cell membrane. 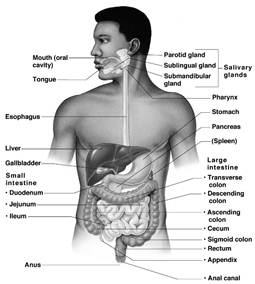 Food is taken inside the body through the mouth. Mouth contains teeth, tongue and salivary glands. Food enters the mouth and gets chewed by the teeth and mixes up with the saliva. Saliva helps in digesting starch present in the food. The partially digested food is swollen down to oesophagus.

Stomach is a bag like structure which receives slightly digested food from oesophagus. Wall of stomach secretes mucus, hydrochloric acid and digestive juices. The digestive juices break down the proteins into simpler substances. Now the food is sent to the small intestine.

It is a long and wide tube where most of the water from undigested food is absorbed and the waste is stored in the rectum. The waste is removed out of body through anus.