Shopping List- To help yourself understand what a concrete noun is, you can create a shopping list for the grocery store or mall. Each letter of the alphabet must be represented on the list and must include concrete nouns that can actually be found in the type of chosen.

This lesson will help you to:-

Definition: A noun is the name of a person, place, or thing.

There are five different kinds of noun:

(a)    Proper Noun: It is the name of particular person or place and is always written with a capital letter. Eg. Shah Jahan constructed some of the remarkable monuments in India. Indira Ghandi, the first woman prime minister of India, was dynamic lady.

(b)   Common Noun: It is a name which is common to any and every person or thing of the same kind. E.g. Boys like to play cricket and football. Small towns are growing today at a faster rate.

(c)    Collective Noun: It denotes a number of persons or things grouped together as one complete whole. Eg. It is very interesting to study and view the constellations in a clear sky. Different band of musicians are performing at the concert.

(d)    Material Noun: It denotes the matter or substance of which things are made. Eg. Iron and steel industry is a key industry in our country. There has been a significant increase in the price of gold.

(e)   Abstract Noun: It is the name of some quality, state or action considered to be part from the thing to which it belongs. Eg, Patience is the best remedy for every trouble. Knowledge and wisdom are complementary to each other.

1.       Rabindranath Tagore was the first Nobel laureate of India.

2.       The holy Vedas are the oldest texts of Hindu mythology.

1.       An umbrella saves us from the scorching heat of the sun and heavy rains.

1. Bee hive is reared in large scale production of honey.

1.       Petrol is very precious as it speeds up our mobility from one place to another. 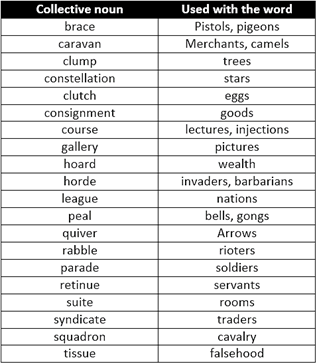 B. Formation of Nouns from Adjectives 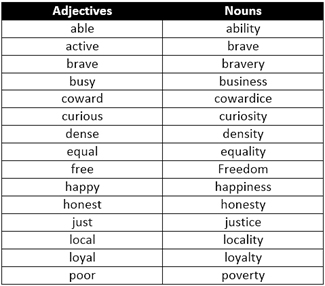 There are some nouns which are plural in form but may be used in singular sense. Eg. Mathematics, Statics, Economics, etc. Eg. My mathematics book is the heaviest of all. But when mathematics equals to mathematical calculations and economics equals to economic facts them these should be treated as plural nouns. Eg. Your mathematics are not as weak as that of me.

When two nouns are joined together to point out the same thing or person then it should be treated as singular. Eg. bread and butter is my favourite breakfast.

When a proper noun becomes a common noun then articles (a, an, the) should be used before that common noun. Eg. Kalidas is the Shakespeare of India.

'The' should not be use before an abstract noun. Eg. Honesty is the best policy. Charity begins at home. Abstract nouns are never used in the plural form.

C. Formation of Nouns from Verbs 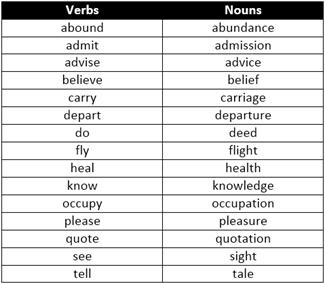 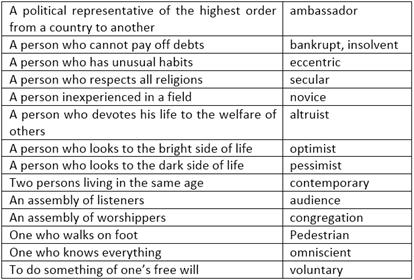 Gender Formation: There are four types of gender-

(c)    Common: when we are not sure if the person or animal is male or female Example: parent, adult, child

There are various rules to form plurals.

(d)   We add ?es? to the words ending with o. Example: mango-mangoes. But there are exceptions to this rule. Example: photo-photos, cargo-cargos.

(j)     There are few objects which are said in plural even they are singular. Example: scissors, tongs, jeans, trousers, spectacles, etc.

(k)    There are few objects which are said in plural even they are singular.   Example: honesty, kindness.

(l)      For compound words we add ?s? to the main word. Example: mother-in-law changes to mothers-in-law, commander in chief changes to commanders-in-chief.