After the drawback found in Rutherford model of an atom, it became necessary to find the reason for the stability of the atom. Bhor put forward his model of an atom and this was found to be acceptable to almost all the scientis of that time. According to Bhor model, an atom consists of nucleus which contains neutron and proton and electron that revolve around the nucleus in the fixed orbit and do not radiate energy. Energy is radiated or absorbed by an atom only when an electron moves from one shell to another. When electrons jumps from lower to higher energy level, it absorbs energy and when it jumps from higher to lower it radiates energy. The energy is always radiated or absorbed in the form of packet called photons. The orbit or the shell in which electrons revolves is called the energy level. 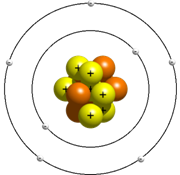 The energy levels are represented by the letters K, L, M, N, —. The maximum number of electrons in first shell called K shell can be 2, in second shell L shell can be 8, in third shell M shell can be 18, and so on. This distribution of electron is called the electronic configuration.

It is defined as the number of proton present in the nucleus of an atom. It is denoted by letter Z.

It is the sum of proton and neutron present in the nucleus of an atom. It is normally denoted by A.

Where/ n is the number of neutron

A is the mass number

Z is the atomic number.

The number of electron present in the outermost shell of an atom is called the valence electron.

The number of electron loosed or gained by an atom to attain the stable electronic configuration is called the valency.

Isotopes of an atom is defined as the atoms of same elements having same atomic number but having different atomic mass. The isotopes is due to the difference in the number of neutron in an atom.

Drawback of Rutherford model of atom was:

(a) Could not explain the stability of atoms

(b) No explanation of Isotopes

(c) No explanation for the neutral nature of atom

(d) Neutron was not known

Which one of the following is an isobar?

The e/m for proton depends on which one of the following?

(a) Nature of gas taken in discharge tube