This theory is based on the Pauli exclusion principle.

In isolated atom the valence electrons can exist only in one of the allowed orbitals each of a sharply defined energy called energy levels. But when two atoms are brought nearer to each other, there are alterations in energy levels and they spread in the form of bands. 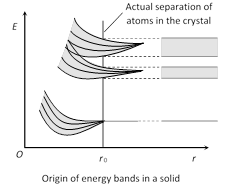 Energy bands are of following types

(i) This band is always filled with electrons.

(ii) This is the band of maximum energy.

(iii) Electrons are not capable of gaining energy from external electric field.

(iv) No flow of current due to electrons present in this band.

(v) The highest energy level which can be occupied by an electron in valence band at 0 K is called fermi level.

(i) It is also called empty band of minimum energy.

(ii) This band is partially filled by the electrons.

(iii) In this band the electrons can gain energy from external electric field.

(iv) The electrons in the conduction band are called the free electrons. They are able to move any where within the volume of the solid.

(v) Current flows due to such electrons.

(i) No free electron is present in forbidden energy gap.

(ii) Width of forbidden energy gap depends upon the nature of substance.