A magnet is an object which attracts pieces of iron like material towards itself. It is found in various shapes and size. The most commonly used magnetic is the bar magnetic and horseshoe magnetic.

A bar magnetic is a rectangular bar of uniform cross section which attracts piece of iron, steel, nickel and cobalt etc. It has two pole near its end, north pole and south pole. If we suspend a bar magnetic freely with the help of a thread it always comes to rest in geographical north- south direction. The other properties of bar magnet is that like pole repel each other and unlike pole attract each other. It is used in many electronic devices like radio, TV, MRI, etc. 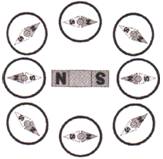 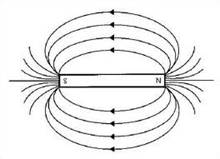 The magnetic line of forces has the following properties: 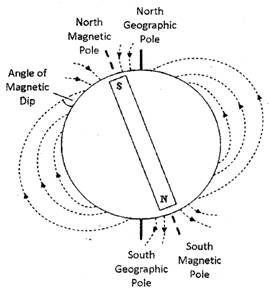 The two ends of the magnet are called:

The device shown in the figure is called:

The angle between the axis of earths magnetic field and the geographical axis is:

Which one of the following is the not the properties of permanent magnet?

(b) Unlike pole attract each other

(c) Magnetic line of force do not intersect each other

(d) Magnetic poles can be separated

(e) none of these

Which one of the following is not a magnetic material?

Magnetic Field Due to a Current Carrying Conductors

Magnetic Field Due to a Straight Current Carrying Conductor

Now we will discuss about the pattern of magnetic field produced by a straight current carrying conductors. Take a straight copper wire and place it in the north south direction as shown in the figure. 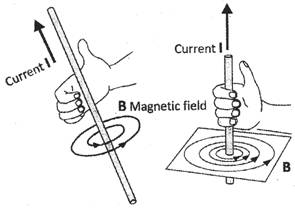 The magnitude of the magnetic field produced by a straight wire at a given point is:

Magnetic Field Due to a Circular Loop

Let us take a straight wire bent in the form of circular loop as shown in the figure below. When the current is passed through the loop the magnetic field is produced around it. 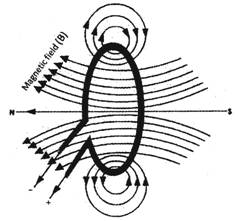 Magnetic Field Pattern Due to a Solenoid

A solenoid is a circular coils of many turns of insulated copper wire, wrapped closely in the shape of a cylinder.

The two end of the solenoid acts like the pole of the bar magnet, i.e. North Pole and South Pole. The strength of magnetic field depends on:

Normally soft iron rod is used as the core material of the solenoid as it produce strongest magnetism.